Cristiano Ronaldo is set to receive only a one-match ban for his red card in Wednesday's Champions League win over Valencia. 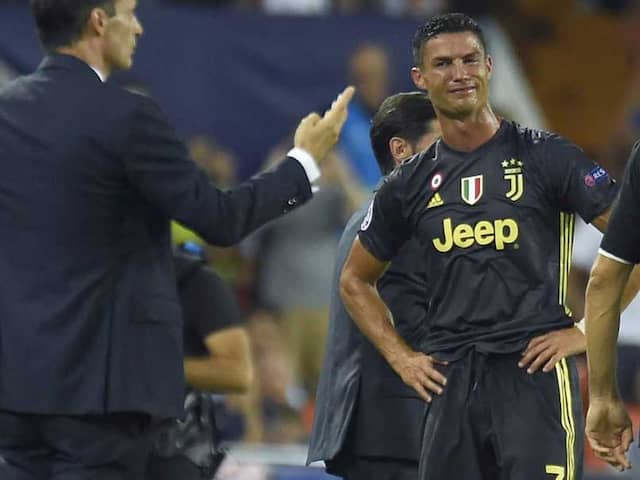 UEFA have opened a disciplinary case over Cristiano Ronaldo's red card in the Champions League which will be assessed on September 27, European football's governing body said on Thursday. Ronaldo was sent off in the 29th minute of Wednesday's 2-0 win away to Valencia after a tussle with defender Jeison Murillo, with the former Real Madrid star leaving the pitch in tears. The Portugal captain fell to the ground in disbelief and then yelled into the air in frustration, although Juventus overcame his dismissal thanks to a pair of Miralem Pjanic penalties.It was the 11th red card of Ronaldo's career, but first in the Champions League, and will see him miss Juve's next group game against Swiss side Young Boys in Turin.

He will find out next week whether his one-match ban is extended. An increase would also rule him out of a return to Old Trafford to face former club Manchester United.

Ronaldo's arrival at Juventus has raised expectations of a first Champions League title since 1996, with share prices peaking at a record 1.8046 euros on the stock market Thursday before closing at 1.581 euros.

It represented an increase of more than 180% since late June when rumours began circulating of Ronaldo's arrival at the club, with shares then trading at 0.64 euros.