Cristiano Ronaldo continues to train away from rest of the team as his leg injury needs him to do specific exercises ahead of the FIFA World Cup. 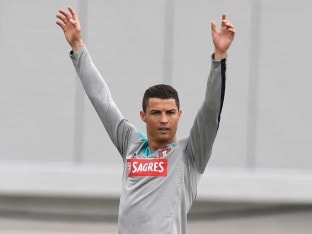 Cristiano Ronaldo during a training session for Portugal.

Cristiano Ronaldo on Wednesday continued his special training regimen aimed at getting over leg injuries that threaten his participation in Portugal's World Cup opener.

As on Tuesday, the Portuguese superstar and injured teammate Raul Meireles, continued to work separately from the bulk of the squad training at the New York Jets' facility in Florham Park near New York.

Ronaldo looked relaxed and smiled for the cameras at the state-of-the-at training center of the NFL's Jets, where he jogged around a playing field.

Defender Pepe, Ronaldo's Real Madrid teammate who is also injured, did not attend the training session but remained at the team hotel pursuing his rehabilitation program, officials said.

"Cristiano Ronaldo and Raul Meireles carried out the programs pre-established by the medical department for their injuries, specific treatments and rehabilitation exercises on the field," the Portuguese Football Federation (FPF) said on it's website.

On Tuesday, the federation confirmed that Ronaldo, who was known to be nursing a left thigh injury, also has patellar tendinitis in his left knee.

The physical problems of their captain and talisman could deal an early blow to Portugal's World Cup bid as they face a tough first round in Group G, which also includes powerful Germany, Ghana and the United States.

Ronaldo, who has scored 49 goals in 110 matches for Portugal, didn't play in the country's first World Cup warm-up match, a goalless draw with Greece on Saturday in Lisbon.

Two more friendlies are on Portugal's slate before they depart the United States for Brazil, against Mexico on Friday and against Ireland on Tuesday.

They face a daunting World Cup opener on June 16 against Germany.

"Portugal has to go step by step, because it's a very difficult group," Hugo Almeida a former Werder Bremen striker now under contract to Besiktas in Turkey.

"The first game is almost a final for us," added Almeida, a veteran of Portugal's 2010 World Cup campaign. "Germany is a very strong team."