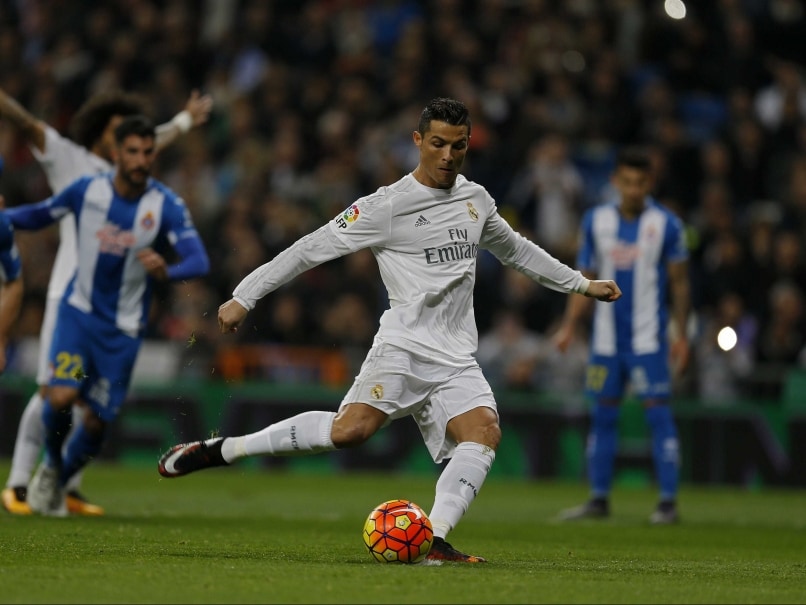 Cristiano Ronaldo scored his 29th La Liga hat-trick as Zinedine Zidane's Real Madrid moved back to within four points of leaders Barcelona with a 6-0 thrashing of Espanyol on Sunday. (Click here for latest Football stories)

In keeping with their fast starts under new boss Zidane at the Santiago Bernabeu, Madrid raced into a 4-0 half-time lead with Karim Benzema and James Rodriguez's first goal since November adding to Ronaldo's double.

The three-time World Player of the Year sealed his latest La Liga hat-trick nine minutes from time before Oscar Duarte's own goal ensured a repeat scoreline from when the sides met earlier this season.

"We all needed to work harder as a team and now we have a positive mentality," Ronaldo told Canal Plus of Zidane's impact.

"The pre-season wasn't very good, there was a lot of travelling. Zizou has arrived with different ideas and we need to continue like this."

Victory also moves Real just a point behind local rivals Atletico Madrid after their 2-1 defeat to Barca in a top of the table clash on Saturday.

However, Barcelona also have a game in hand on both Madrid clubs.

"Our objective is to do our best in every game and get to the end of the season with the chance to win the league," said Zidane.

"My expectations for the league are still high, it is not over."

Real have now struck 41 goals in seven games at home since being thrashed 4-0 by Barcelona in November.

Zidane's men again made a flying start as Rodriguez's cross from the right picked out Benzema to take his tally for the season to 22 goals in 21 games after seven minutes.

Ronaldo hit five when the sides met earlier in the campaign and was among the goals once more as he doubled the lead from the penalty spot after being brought down by Enzo Roco.

Rodriguez's deflected effort killed the game as a contest after just 18 minutes and Benzema could easily have made it four as he shot wide after a lovely one-two with Isco.

Ronaldo did get the fourth before the break with an audacious piece of skill to skip past Alvaro Gonzalez before blasting into the top corner on his left foot.

Madrid's intensity dropped after the break with the points in the bag, but Ronaldo wasn't to be denied another hat-trick as he nodded home Jese Rodriguez's cross to register his 30th goal of the season.

And Duarte's own goal rounded off the scoring from another dangerous Jese cross.

In contrast to Zidane's comfortable start to life in La Liga, Neville's Valencia nightmare continued as his winless streak stretched to eight games.

Antonio Sanabria's penalty five minutes into the second-half handed Sporting their first away win since October as Valencia paid for missing a host of clear-cut chances, most notably through captain Alvaro Negredo.

Victory moves Sporting out of the relegation zone up to 16th with Valencia now just six points off the drop zone in 12th.

Yet, Neville denied his position was fast becoming untenable.

"You're asking me about my position. I find this question ridiculous," said the former Manchester United captain.

Elsewhere, Sevilla maintained their chase of Villarreal for the fourth Champions League place with their 11th consecutive win at home in all competitions, 3-1 over bottom side Levante.

Celta Vigo missed the chance to move back up to fifth as they conceded a last minute winner to Las Palmas in a 2-1 defeat.

Comments
Topics mentioned in this article
Cristiano Ronaldo Real Madrid Espanyol Football
Get the latest updates on ICC Women's Cricket World Cup 2022 and IPL 2022, check out the Schedule , Live Score and IPL Points Table. Like us on Facebook or follow us on Twitter for more sports updates. You can also download the NDTV Cricket app for Android or iOS.