Gareth Bale headed one into the nets in the 43rd minute, while Cristiano Ronaldo scored with a penalty in the 82nd minute. 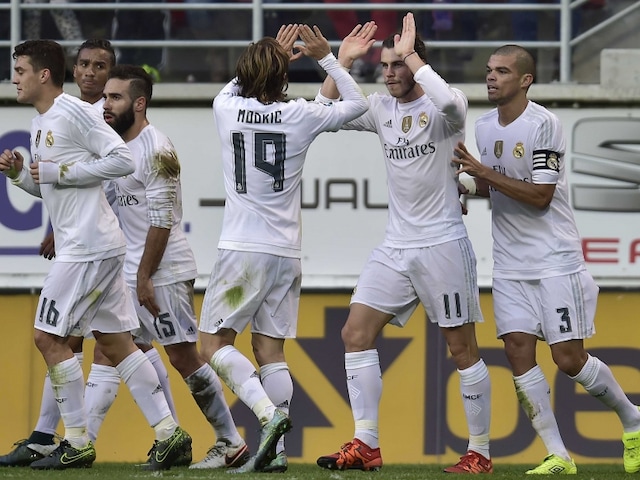 Real Madrid got their La Liga title challenge back on course despite an underwhelming performance as goals from Gareth Bale and Cristiano Ronaldo handed them a 2-0 win at Eibar on Sunday.

In front of a capacity 6,000 crowd at Ipurua, Madrid did little to dispel the doubts caused by their 4-0 thrashing by Barcelona last weekend but Bale's first-half header and a late penalty from Ronaldo were enough for all three points.

"The important thing was to get the three points and do so with this spirit of sacrifice," said Madrid boss Rafael Benitez.

"The fans know that the most important thing when you have players of this quality is that they also work as they did today.

"That is the key if we want to continue being strong in the future."

Eibar have enjoyed a stellar start to just their second season in the top flight, but as against Barcelona and Atletico in their only other two prior defeats this season, they didn't have enough quality to trouble Madrid in the final third.

After a slow start, Ronaldo was presented with a great chance to open the scoring on 15 minutes from James Rodriguez's fine through ball, but he couldn't lift the ball over the advancing Asier Riesgo and Mateo Kovacic wastefully fired the rebound over.

Madrid's pressure told two minutes before the break when Luka Modric's brilliant cross was flicked home at the near post by Bale for his first goal for Madrid in three months.

The Welshman could have had a second moments later as he brilliantly controlled a long ball into the box, but lacked the power needed in his final effort to beat Riesgo.

Bale turned provider at the start of the second period with a pinpoint cross for Ronaldo only for the Portuguese to fluff his lines when attempting an overhead kick.

Ronaldo's wayward afternoon in front of goal continued when he somehow failed to hit the target with the goal at his mercy after rounding Riesgo from Lucas Vazquez's pass.

Yet, he was gifted the chance to register his 16th goal of the season when referee Gil Manzano pointed to the spot after Vazquez went down under minimal contact from Dani Garcia eight minutes from time.

Elsewhere, Valencia coach Nuno Espirito Santo confirmed a 1-0 defeat at Sevilla would be his last in charge of the club.

Sevilla dominated from the off and were handed a huge boost when Joao Cancelo was sent off for a second bookable offence 10 minutes before half-time.

Sergio Escudero finally opened the scoring when he connected brilliantly with Ever Banega's clever cross five minutes into the second-half.

Valencia ended with nine men as Javi Fuego also picked up a second yellow card to leave Los Che still five points off the top four with Barcelona to come at home next weekend.

Villarreal missed the chance to move back into the top four as their awful form continued with a 2-0 defeat at Getafe.

Angel Lafita and Alvaro Vazquez struck for the hosts to leave Villarreal still in sixth having won just one of their last seven league games.

Meanwhile, Aritz Aduriz became the first Spanish striker to score 20 goals in a season before December this century as he netted a hat-trick in Athletic Bilbao's 3-0 romp at Rayo Vallecano.

Comments
Topics mentioned in this article
Cristiano Ronaldo Gareth Bale Luka Modric Eibar Real Madrid Football
Get the latest Cricket news, check out the India cricket schedule, Cricket live score . Like us on Facebook or follow us on Twitter for more sports updates. You can also download the NDTV Cricket app for Android or iOS.