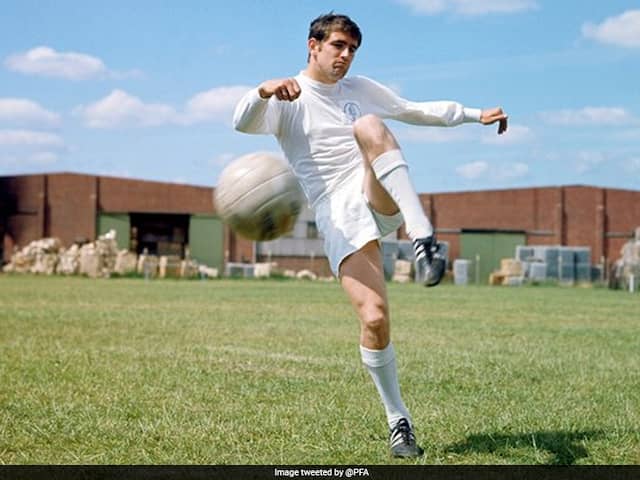 Norman Hunter won 28 caps for England and was part of the 1966 World Cup-winning squad.© Twitter@PFA

Leeds United great and England international Norman Hunter has died aged 76 after contracting coronavirus, the Championship club announced on Friday. The famously tough-tackling defender, who was at the heart of the Leeds side during a golden era for the club under manager Don Revie, was admitted to hospital last week. Hunter, nicknamed 'Bites yer Legs', amassed 726 appearances for Leeds over a 14-year period in the 1960s and 70s.

He won 28 caps for England and was part of the 1966 World Cup-winning squad.

Leeds said in a statement: "Leeds United are devastated to learn of the passing of club icon Norman Hunter at the age of 76.

"Norman was taken to hospital last week after being diagnosed with COVID-19 and despite continuing to battle and the best efforts of NHS (National Health Service) staff, he sadly lost his fight earlier this morning."

"He leaves a huge hole in the Leeds United family," the statement added. "His legacy will never be forgotten."

He was a member of Alf Ramsey's 1966 World Cup-winning squad but did not play in the tournament, as he could not break the partnership of Jack Charlton and Bobby Moore.

He eventually received a winner's medal in 2009, alongside other players who had missed out.

Although his reputation was built on his defensive ability, Hunter was also comfortable on the ball and usually remained composed, although his infamous on-field punch-up with Derby's Francis Lee during a televised league game at the old Baseball Ground in 1975 made headline news.

That year also saw Hunter play in Leeds' defeat by Bayern Munich in the European Cup final in Paris, when they were on the end of some controversial refereeing decisions.

Riots by Leeds fans during the match eventually saw the club banned from European competition for two years.

Hunter left Leeds in 1976 to join Bristol City and ended his playing career with Barnsley, whom he later managed before taking charge of Yorkshire rivals Rotherham.

Hunter was the winner of the Professional Footballers' Association's inaugural player of the year award in 1974.

The players' union said: "All at the PFA are deeply saddened to hear of Norman Hunter's passing. Football has lost a legend and we join the entire football community in mourning this loss."

The English Football League tweeted: "We are saddened to learn of the passing of former @LUFC, @BristolCity and @BarnsleyFC defender Norman Hunter at the age of 76. Our thoughts are with his loved ones at this very difficult time."