Goals in each half from Paris Saint-Germain star Thiago Silva and Bundesliga-based striker Roberto Firmino clinched a win which ensured Brazil qualified for the last eight of the Copa America. 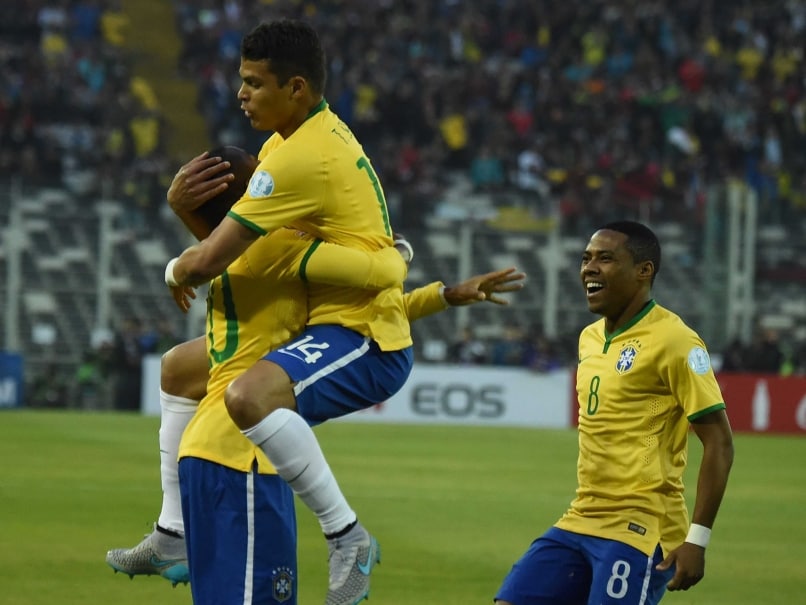 Brazil shrugged off the absence of suspended captain Neymar to reach the Copa America quarter-finals here Sunday with a 2-1 victory over Venezuela.

Goals in each half from Paris Saint-Germain star Thiago Silva and Bundesliga-based striker Roberto Firmino clinched a win which ensured Brazil qualified for the last eight on top of Group C.

Silva - who earlier celebrated finding the net with a dedication to Neymar - praised Brazil's team effort.

"The best thing today is we had a very cohesive team," he said. "Football is played this way -- as a team.

"If you are an individual player you can lose focus on the collective effort. Neymar is missed, he won't play any more in this Copa America. We played for him but in a different way."

Brazil will now face Group B runners-up Paraguay in the quarter-finals on Saturday.

"It's going to be a tough match," said Silva of the 2011 finalists, who knocked Brazil out four years ago.

"Any team here is hard. Paraguay got to the last Copa America final and got there on merit, beating us along the way.

"Beating them on Saturday will have a special meaning."

Brazil had suffered a shock 1-0 loss to Colombia in their last outing, a contest which ended with a post-match brawl that led to Neymar receiving a tournament-ending four-match ban.

Defeat to Venezuela on Sunday would have seen the five-time world champions making a humiliating first-round exit from the South American showpiece but that outcome never looked likely as Brazil dominated the start.

Brazil coach Dunga had opted to replace Neymar -- looking down from the stands at Santiago's Estadio Monumental -- with Santos striker Robinho while the captain's armband was passed to defender Miranda.

With Colombia being held to a 0-0 draw in the earlier Group C game, Brazil headed into the match comfortable in the knowledge that a point would be good enough.

But any suggestion Brazil would give Venezuela an easy ride was snuffed out in the opening minutes as they seized control of the contest.

The breakthrough came after only nine minutes.

Robinho flighted a corner from the right into the heart of the penalty area and Silva was on hand to sidefoot a sweetly struck volley past goalkeeper Alain Baroja, who failed to react in time as the ball flew into the roof of the net.

Brazil then set about extending their lead but were unable to find a second goal.

Robinho came close but saw his shot go just over following patient approach play before Chelsea defender Filipe Luis drew a fine save from Baroja when he thumped a fierce angled shot goalwards from the left hand side of the box.

Venezuela's lone first-half attempt on goal came on the half-hour mark, when a free-kick from Malaga defender Roberto Rosales was flicked on by Andres Tunez, forcing Jefferson to save smartly.

Brazil started the second half as they finished the first, laying siege to the Venezuelan goal.

Liverpool forward Philippe Coutinho unleashed a shot which flew wide, and Silva almost grabbed his second goal from a setpiece, thumping a header from a Willian corner only to be denied by a superb Baroja save on 49 minutes.

Brazil did not have long to wait for their second, however, which arrived on 52 minutes. Willian skipped away from Rosales with ease down the left flank before crossing to Firmino who sidefooted home from close range for 2-0.

Brazil looked to be heading to an easy victory but Venezuela ensured a tense finale with Fedor's late goal.

Juan Arango's free-kick was tipped onto the post by Jefferson but Fedor was on hand to head in the rebound.

Venezuela mounted a late rally for an equaliser but were unable to find the goal that would have seen them squeeze through to the quarter-finals at the expense of Colombia.

Colombia, who reached the last eight as one of the two best third placed teams, now face Argentina in the quarter-finals on Friday.

Chile face Uruguay on Wednesday while Bolivia will play Peru.

Comments
Topics mentioned in this article
Neymar Thiago Silva Brazil Venezuela Football
Get the latest updates on India vs Australia Series, check out the India vs Australia Schedule for 2020-21 and Ind vs Aus live score . Like us on Facebook or follow us on Twitter for more sports updates. You can also download the NDTV Cricket app for Android or iOS.