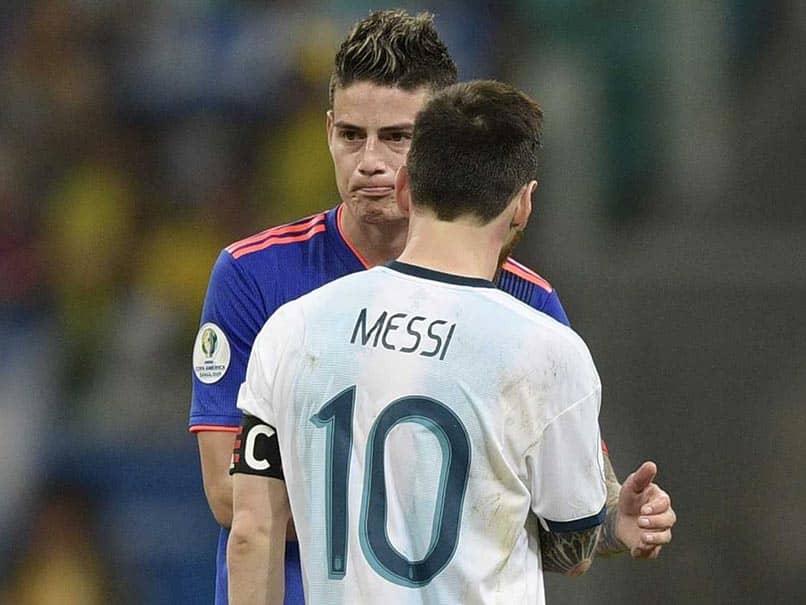 Lionel Messi said his team was feeling bitter after Argentina lost their opening Copa America match 2-0 to Colombia despite dominating the second half. Goals from Roger Martinez and Duvan Zapata in the final 20 minutes gave Colombia their first tournament victory over Argentina in 20 years as Messi's hopes of finally landing a major international tournament after losing in four finals suffered a serious blow. "We leave here feeling bitter," said Messi following the Group B clash in Salvador.

"In the second half we had our chances."

One of the best of those fell to the 31-year-old Barcelona icon but he headed wide after Colombia's goalkeeper David Ospina got down quickly to push out a header from center-back Nicolas Otamendi.

But although Argentina dominated possession and created more chances in the second period, they rarely caused Ospina any serious concerns.

"We didn't want to start this way, obviously, but now we have to lift our heads and keep going," said the five-time Ballon d'Or winner, who lined up in an enviable forward trio with Manchester City's Sergio Aguero and Angel Di Maria of Paris Saint-Germain.

"In the first half we retreated a little and were holding on, but in the second we really opened up," said Messi, the Argentina captain.

"Whenever you lose it's hard for us, we usually take it badly. Now we have to think about Paraguay."

Argentina can still make the knock-out stages with games against Paraguay and guests Qatar, the Asian champions, to come.

Midfielder Leandro Paredes, who forced a diving save out of Ospina with one long range strike and sent a second whistling past the post, was pleased with the second half performance.

"We created a lot but unfortunately they scored in our best period," he said.

Colombia were the better side in a goalless first half but scored twice against the run of play in the second period, with both goals coming from substitutes.

"I came on and helped my team. We did the best we could and we managed to turn the game around at the end of the second half. We played really well," said Zapata, who this season helped Italians Atalanta qualify for the Champions League for the first time in their history.

Portuguese coach Carlos Queiroz, who only took over Colombia after leaving his job with Iran at the end of the January-February Asian Cup, paid tribute to the side's collective effort.

"Colombia as a team was the best player on the pitch. We played with a lot of discipline, concentration, with responsibility, and players with the quality of James (Rodriguez) and (Radamel) Falcao helped us a lot in this organization," said Queiroz.

And he praised his team for "controlling Messi a bit," noting that "we're always talking about him and you cannot neutralize him."

Both he and Argentina counterpart Lionel Scaloni agreed that each side had their moments during the game.

"In some moments we were on top, then they were superior to us -- that's how football goes, there are different stages in matches," said Scaloni.

Colombia, though, are well placed to win the group now.

"We're still a long way from where we want to go," warned Colombia's playmaker James Rodriguez.

Lionel Messi James Rodriguez Football
Get the latest updates on India vs Australia Series, check out the India vs Australia Schedule for 2020-21 and Ind vs Aus live score . Like us on Facebook or follow us on Twitter for more sports updates. You can also download the NDTV Cricket app for Android or iOS.