Copa America: Ecuador Thrash Haiti, To Face US in Quarter-Final

Ecuador thrashed Haiti 4-0 as they qualified for the Copa America quarter-finals for the first time in 19 years. 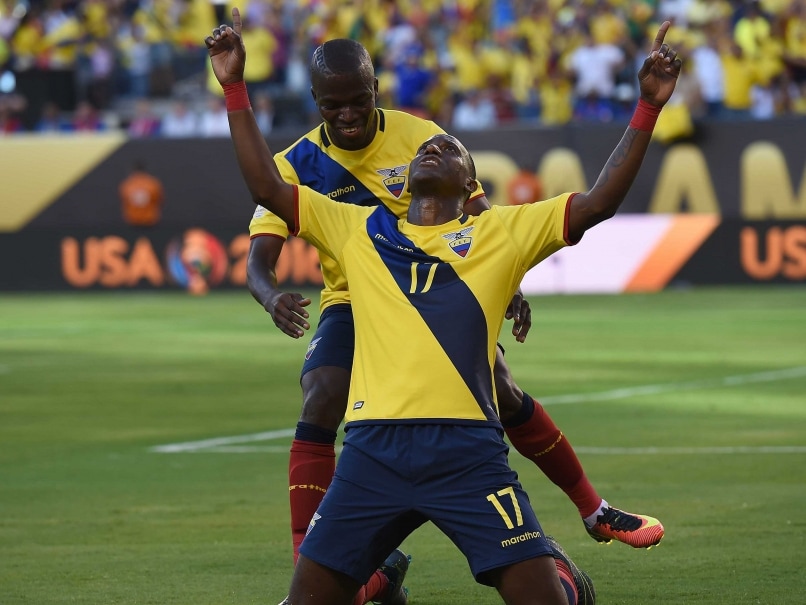 Enner Valencia and Antonio Valencia were the stars as Ecuador thrashed Haiti 4-0 to enter the Copa America quarter-final.© AFP

Ecuador set up a Copa America Centenario quarter-final showdown with the United States on Sunday after romping to a comfortable 4-0 win over Haiti.

Goals from Enner Valencia, Jaime Ayovi, Christian Noboa and Antonio Valencia completed a routine win for Ecuador who are now assured of finishing in second place in Group B.

Peru and Brazil play later Sunday with the winner of that game assured of reaching the quarter-finals as group winners.

A draw would leave Brazil, Peru and Ecuador level on five points, but Brazil would advance as group winners with Ecuador second by virtue of their superior goal difference.

Ecuador, making their first appearance in the Copa America quarter-finals since 1997, will now travel to Seattle to face the United States at CenturyLink Field on Thursday for a place in the semi-finals.

Haiti, mauled 7-1 by Brazil in their previous game, were given a similarly torrid time by a rampant Ecuador side who attacked at will during a breathless opening period.

Ecuador defender Arturo Mina set the tone for a one-sided encounter, blazing over the bar after only three minutes with the Haiti goal at his mercy.

The opening goal came in the 11th minute, Enner Valencia taking advantage of acres of space down the left flank to get behind the Haiti defense before calming tucking away a low finish beneath the advancing Johny Placide.

Enner Valencia then turned creator for the next goal. A superb dummy by Jaime Ayovi allowed the ball to run through to the West Ham player who turned and went clear once more.

Ayovi had sprinted into space after his dummy and Valencia unselfishly squared to the striker who tapped into an empty net for 2-0.

Ecuador's large contingent of fans in a crowd of around 50,000 at the MetLife Stadium in New Jersey were made to wait for their team's third goal.

It arrived on 57 minutes, Russia-based central midfielder Christian Noboa hammering in a half volley just inside the area to make it 3-0.

Manchester United's Antonio Valencia was the next to get on the scoresheet after Haiti's porous defense was again caught square.

Once again Enner Valencia went clean through on goal and calmly rolled a pass into the path of his namesake who finished for 4-0.

Comments
Topics mentioned in this article
Ecuador United States Peru Brazil Enner Valencia Football
Get the latest updates on IPL Auction 2023 and check out  IPL 2023 and Live Cricket Score. Like us on Facebook or follow us on Twitter for more sports updates. You can also download the NDTV Cricket app for Android or iOS.