Claudio Bravo Urges Chile to Focus on Argentina, Not Just on Messi

Chile goalkeeper Claudio Bravo plays with Lionel Messi and Javier Mascherano for FC Barcelona. He urged his teammates to focus on the entirety of Gerardo Martino's side and not just one player. 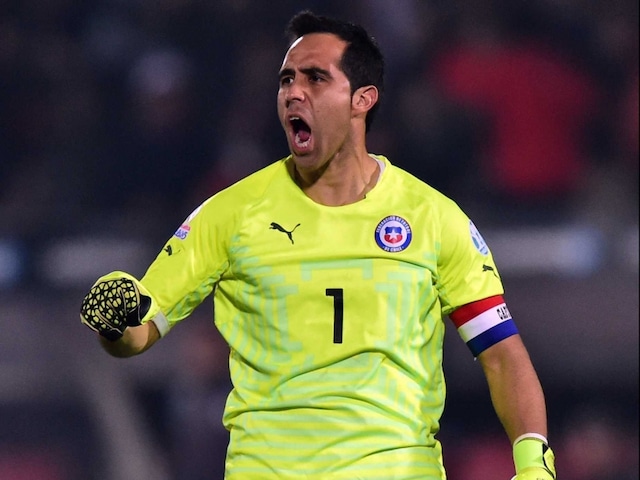 Chile goalkeeper Claudio Bravo has warned his teammates not to be focussed solely on stopping star striker Lionel Messi in the Copa America final, but concentrate on the entire opposition.

The keeper plays with Messi and Javier Mascherano for FC Barcelona and knows first-hand the quality that both possess. (Argentina, Chile Poised For Copa America Classic)

On Saturday, they will go head-to-head in the Copa America final here.

He admitted that such knowledge gives him some cause for concern, but suggested that Chile must focus on the entirety of Gerardo Martino's side and not just one player. (Copa America Final 'Not War')

"The truth is that it is not easy, seeing the quality that Leo has and what he has done throughout his career, it's been amazing," Bravo said in a press conference on Friday. (Aguero Wants to Make Up For Dismal World Cup Display)

"I think that our focus is the team - that as a team we can control Leo and the other class players.

"Javier is a very valuable player who gives character to your team, is the heart of the side.

"The performance of the team does not only go through Javier or Leo." Ahead of the clash at the Estadio Nacional, Bravo insisted Chile are not afraid of taking on the World Cup 2014 runners-up and that Jorge Sampaoli has prepared the team well.

"We never have fear with any team. We have the maximum respect for all national teams," he added.

"The feeling which is not only mine, but of all my team-mates, is of great happiness to see that the work we are doing is on track.

"By continuing the style of play we had under (former coach Marecelo) Bielsa we have always tried to capture the idea that Chile play as equals with any team.

"We are prepared, we know how he have to play. We have always tried to play and suffocate with our pressing."

There have been worries of the fitness of La Roja's star striker Alexis Sanchez, but Bravo was quick to allay suggestions that he may miss the showpiece event.

"He worked normally, is fine and in good condition. No player has been ruled out."

Comments
Topics mentioned in this article
Chile Argentina Claudio Bravo Lionel Messi Javier Mascherano Football
Get the latest Cricket news, check out the India cricket schedule, Cricket live score . Like us on Facebook or follow us on Twitter for more sports updates. You can also download the NDTV Cricket app for Android or iOS.