Just four days before facing Barcelona in the first leg of their Champions League last 16 tie, Conte named a much-changed side with Thibaut Courtois, Cesar Azpilicueta, N'Golo Kante and Eden Hazard not even included in the Italian's squad. 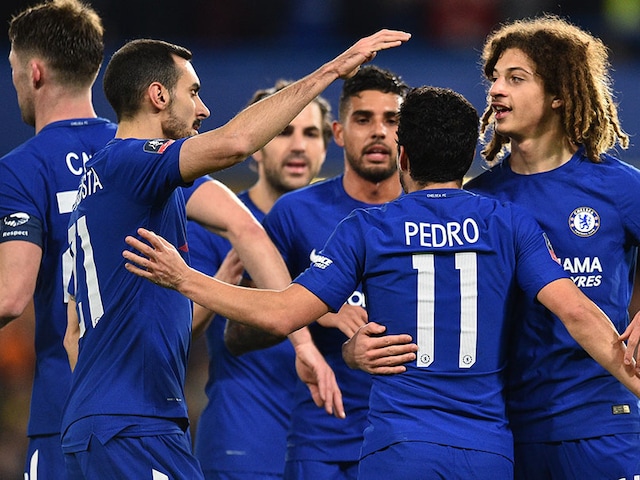 Antonio Conte believes Chelsea are ready for a season-defining few weeks after Willian starred with two goals to blow away Hull City 4-0 to reach the FA Cup quarter-finals on Friday. Just four days before facing Barcelona in the first leg of their Champions League last 16 tie, Conte named a much-changed side with Thibaut Courtois, Cesar Azpilicueta, N'Golo Kante and Eden Hazard not even included in the Italian's squad.

But they still had too much quality for the Championship strugglers as two great strikes from Willian added to goals from Pedro Rodriguez and Olivier Giroud's first for Chelsea put the hosts 4-0 up by half-time.

Conte made seven changes in all from the side that beat West Brom 3-0 on Monday to ease the mounting pressure on his job after damaging defeats by Bournemouth and Watford.

Once again the Chelsea support showed their backing for the former Juventus boss, but more challenging tests lie ahead in their bid for Champions League glory, and a place back in the competition next year via the top four of the Premier League should they fall short.

Barca's visit to the Bridge on Tuesday is followed by consecutive trips to Manchester United and Manchester City on league duty before the return leg at the Camp Nou on March 14.

"We lost two games at the end of a busy period. Now we have the right confidence again," said Conte.

"But in the next two weeks we have to play massive games and we must be strong - Barcelona, United and City. We are ready."

Willian did no harm to his case to start against the Catalans with a stunning all-round display capped by his two goals.

"For sure, his performance was impressive," added Conte.

"I hope to see always this type of performance because, when Willy plays in this way, it is a great joy for me, the team, the club and our fans."

The Brazilian opened the scoring after just two minutes as he jinked inside onto his weaker left foot but still produced a fine curling shot into the far corner.

A former Barca duo combined for the second as Cesc Fabregas's lofted pass freed Pedro in behind the Hull defence to slot past David Marshall.

Willian showed he is capable of scoring from range off either foot as his low drive cushioned the post on its way past Marhsall moments later for his 10th goal of the season.

Giroud then cut a relieved figure when he tucked home debutant Emerson Palmieri's low cross to round off a first 45 minutes to forget for the visitors.

"I was waiting for it," said Giroud. "It was important for me to score my first goal. It's relieved me a little bit."

Hull had the chance to salvage some pride early in the second-half when Fabregas tripped Liverpool loanee Harry Wilson inside the area.

And Willian was inches away from the hat-trick his display deserved when another long-range effort came back off the post two minutes from time.

Leicester joined Chelsea in the last eight as Riyad Mahrez provided the spark for the Foxes on his return to the starting line-up.

The Algerian's only appearance in Leicester's previous three outings came as a late substitute in a 5-1 drubbing at Manchester City last weekend following his self-imposed exile from training after Leicester rejected City's advances for the winger last month.

However, he showed why the runaway Premier League leaders were interested with the teasing cross for Jamie Vardy to head home the only goal in a 1-0 win over Sheffield United.

Comments
Topics mentioned in this article
Football Chelsea Hull City Tigers Willian
Get the latest Cricket news, check out the India cricket schedule, Cricket live score . Like us on Facebook or follow us on Twitter for more sports updates. You can also download the NDTV Cricket app for Android or iOS.