It was a case of third time lucky for Chelsea, who lost in the semi-finals in both the League Cup and the FA Cup this season, while Basel fell short in their attempt to become the first Swiss team to reach a major European final. 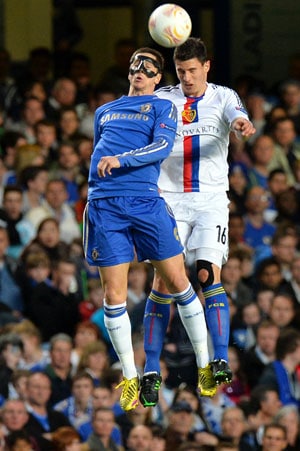 Chelsea reached the Europa League final for the first time in their history after surviving a first-half scare to defeat Swiss champions FC Basel 3-1 in the second leg of their semi-final on Thursday.

But goals from Fernando Torres and Victor Moses and a David Luiz stunner early in the second half gave last season's Champions League winners a 5-2 aggregate victory that sets up a meeting with Benfica in the final in Amsterdam on May 15.

It was a case of third time lucky for Chelsea, who lost in the semi-finals in both the League Cup and the FA Cup this season, while Basel fell short in their attempt to become the first Swiss team to reach a major European final.

Chelsea interim manager Rafael Benitez will now look to end a testing season by claiming the second Europa League title of his career after his 2004 success with Valencia, although his immediate priority is to secure a return to the Champions League via the league.

"I came to do a professional job with the commitment of the players. I am pleased for them and everyone here," said Benitez, who has struggled to win over the club's fans since arriving in November.

"We have had a very good atmosphere, the players have always worked hard, and they have always done their job."

Basel captain Marco Streller passed a late fitness to start at Stamford Bridge and he almost made an immediate impression, shooting wide from a good position in the first minute.

Chelsea's fans had just taken to serenading former coach Jose Mourinho, who has been linked with a return to the club this week, when the hosts' first chance arrived in the ninth minute.

Torres' clipped pass freed Frank Lampard, but his shot came back off the post, leaving the England midfielder one goal behind Bobby Tambling in the club's all-time scoring chart on 201 goals.

Basel continued to attack gamely, however, and after being thwarted once by Petr Cech, Salah broke the deadlock in stoppage time when he calmly swept home from Valentin Stocker's cleverly disguised through ball.

The Egyptian's strike left Basel one goal from the final, but Chelsea reasserted their grip on the tie with a rapid three-goal salvo in the first 14 minutes of the second half.

Torres claimed the first, in the 49th minute. After a driving run from the excellent Eden Hazard, Lampard's low shot was pushed out by goalkeeper Yann Sommer and Torres slid in to slam the loose ball into the roof of the goal.

Moses put Chelsea ahead three minutes later with another finish from close range, this time after Torres' low shot ricocheted into his path.

Luiz saved the best for last just before the hour, stepping up to Lampard's lay-off and curling a majestic left-foot shot right into the top-left corner from 25 yards.

Basel's response saw Fabian Frei hit the bar with a deflected shot, while Marcelo Diaz also tested Cech with an effort from distance, but for Chelsea, the worst had already passed.

The hosts might even have amplified their lead further in the dying stages, but Sommer saved well from substitute Juan Mata and Torres.

"The second half went too fast - we made too many mistakes and were caught out cold," said Basel coach Murat Yakin. "But I give full credit to my players."

Benfica emerged victorious from a dramatic last-four tie against Fenerbahce, with a 3-1 win at the Estadio da Luz in Lisbon giving them a 3-2 aggregate victory.

Paraguayan striker Oscar Cardozo was the hero with two expert finishes either side of the interval after a Dirk Kuyt penalty had cancelled out Nicolas Gaitan's opener for the Portuguese club.

Benfica are through to their first continental final since 1990, when they were beaten 1-0 by AC Milan in the European Cup final.

Comments
Topics mentioned in this article
Football Liverpool Aston Villa Chelsea Manchester United Celtic FC Basel Real Madrid Stewart Downing
Get the latest updates on ICC T20 Worldcup 2022 and CWG 2022 check out the Schedule, Live Score and Medals Tally. Like us on Facebook or follow us on Twitter for more sports updates. You can also download the NDTV Cricket app for Android or iOS.