RB Leipzig cruised to a 3-0 win over Tottenham Hotspurs on Tuesday to progress 4-0 on aggregate to the quarter-finals for the first time. 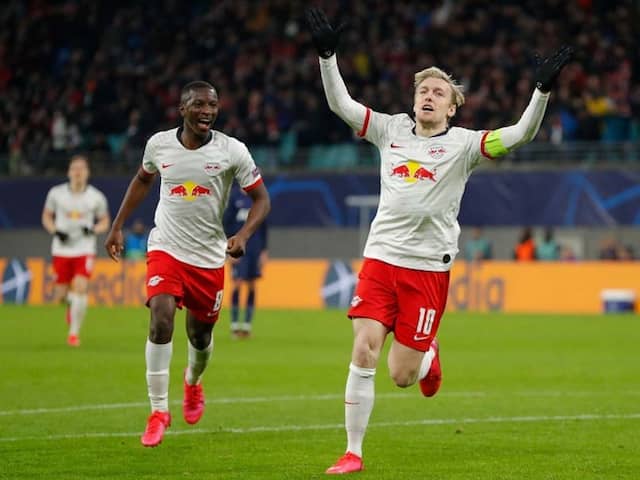 Emil Forsberg found the back of the net for RB Leipzig on Tuesday.© AFP

Tottenham midfielder Dele Alli questioned his side's mental strength after RB Leipzig cruised to a 3-0 win on Tuesday to progress 4-0 on aggregate to the quarter-finals for the first time. Leipzig captain Marcel Sabitzer struck twice in the first 21 minutes before substitute Emil Forsberg added the third late on with his first touch. "We were second to a lot of balls. To concede them goals shows our mentality wasn't strong enough," added Alli.

"We had to show maturity and fight and we didn't do that and we were punished."

Unlike many fixtures across Europe this week, there were no restrictions on supporters attending due to the spread of coronavirus and the Leipzig fans were able to enjoy a nerve-free evening.

However, it was at the other end that they buckled inside the opening quarter of the game as two errors from goalkeeper Hugo Lloris turned a tough task into an impossible one.

Leipzig took just 10 minutes to open the scoring when Lloris did not get a strong enough right hand to stop Sabitzer's strike from outside the box finding the bottom corner.

Timo Werner then fired home from close range only to be denied by the offside flag as Leipzig opened up the Tottenham defence at will.

And the visitors did not learn their lesson as Sabitzer met Angelino's cross with a powerful header, but Lloris should still have done better to keep the ball out at his near post.

Tottenham have now failed to win their last six games in all competitions -- the longest winless streak of Jose Mourinho's managerial career.

And the Portuguese again blamed that run on his lack of options due to an injury list that also includes Moussa Sissoko, Davinson Sanchez and Ben Davies.

"People can say excuses but I'm pretty sure it is bad for anyone," said Mourinho. "I don't think anyone would resist to such a situation."

Spurs produced a remarkable fightback from 3-0 down on aggregate away at Ajax in last season's semi-finals to make the final for the first time in the club's history thanks to Lucas Moura's hat-trick.

But in keeping with their collapse since that night in Amsterdam last May, Mourinho's men lacked the quality and belief needed to reproduce that thrilling fightback.

Forsberg took just 32 seconds after replacing Sabitzer to fire the third goal into the far corner three minutes from time.

"It's a great moment for the history of the club, for me as a manager, and for my young team," said Leipzig's 32-year-old coach Julian Nagelsmann.

"It's totally deserved we go to the next round. We were the better team, scored four goals, conceded none, so we are very happy."

Tottenham's season now hinges on refinding their domestic form if they are not to miss out on the Champions League next season for the first time in five years.

Spurs are eighth in the Premier League, seven points adrift of the top four, and in desperate need for Mourinho to exact revenge on Manchester United for his sacking last season when the Red Devils visit north London on Sunday.

"We know this hasn't been a good season but we can't hide," added Alli. "Confidence is gone at the minute but we have a big game at the weekend and we have to pick ourselves up and go again."

Tottenham Hotspur Football
Get the latest Cricket news, check out the India cricket schedule, Cricket live score . Like us on Facebook or follow us on Twitter for more sports updates. You can also download the NDTV Cricket app for Android or iOS.