Thomas Mueller, who has been in tremendous form, netted twice while Mario Goetze also struck a goal to help FC Bayern Munich beat Olympiakos 3-0 in their Champions League match. 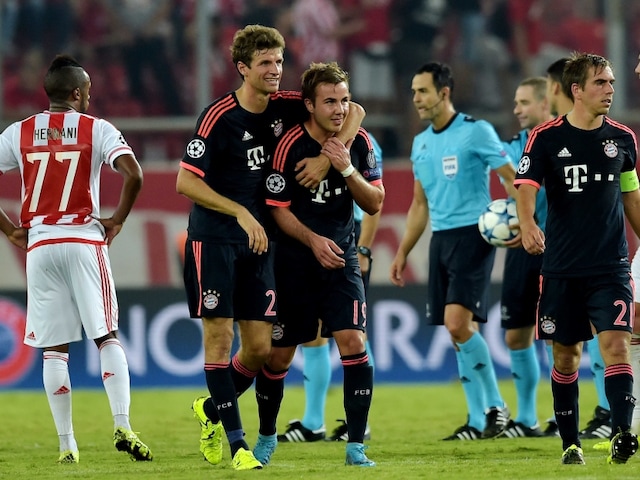 A Thomas Mueller brace and a Mario Goetze snap shot lifted Bayern Munich to a 3-0 win over Olympiakos in their Champions League Group F opener on Wednesday as tensions boiled over on the terraces.

Mueller's first was a long range fluke in the 52nd minute and a nervy Bayern had been watching the clock before a late Goetze shot and Mueller penalty in time added on clinched the three points. (AS Roma Hold FC Barcelona)

"I don't know if I had a pact with the Greek goddess of luck, but it was certainly lucky that it (his goal) slipped in the net," Mueller told ZDF after his amazing strike from outside the area.

"It certainly made things easier for us."

Mueller's opener will cause great debate after his miss-hit cross bamboozled Olympiakos 'keeper Roberto, who raced desperately back to his line and had to watch in horror as the ball hit the top corner.

With Bayern in full flow Roberto then made amends with a superb reflex save to stop an effort from Mueller on 68 minutes. (Chelsea Hammer Maccabi | Arsenal Stunned)

Goetze's goal though was all style in the 88th minute when he twisted on the edge of the six yard box and beat Roberto with both the power of his shot and his speed of thought, from a tight angle.

Then after Olympiakos substitute Arthur Masuaku had fouled his French compatriot Kingsley Koman, Mueller also converted in style from the spot in time added on.

Although Bayern controlled the ball for the greater part of the second half, Olympiakos had two ideal opportunities to break the deadlock.

The first came four minute after Bayern's tally when goalkeeper Manuel Neuer leapt high to tip the ball away from a deadly shot by Ideye Brown.

Without wingers Franck Ribery and Arjen Robben, coach Pep Guardiola, in his third campaign with the 2013 Champions League winners, pacing the sidelines Mueller and Alonso both went close in a goalless first-half.

The visitors suffered a real scare when Ideye found himself alone in front of the imposing Germany stopper Neuer. But the Nigerian international fluffed his chance and was off-side anyway.

Olympiakos had three weak headers from up close by Pajtim Kasami, Brown and Manuel da Costa caught easily by Neuer.

One other threat by the home team came one minute before halftime when Alejandro Dominguez cleverly got by two defenders but was stopped by defender Jerome Boateng.

The match was marred by clashes between riot-trained police and Bayern fans before kickoff resulting in at least one injured spectator.

Bayern fans were seen throwing broken plastic seats and plastic bottles at Olympiakos supporters forcing the police to use their batons to bring order.

Some 1700 travelling fans had been under heavy police protection due to tensions concerning Germany's stance on austerity in the Greek economic bailout.

Bayern lodged an official complaint against treatment by the police of their fans.

Comments
Topics mentioned in this article
Thomas Muller Mario Gotze Bayern Munchen Olympiacos Football
Get the latest Cricket news, check out the India cricket schedule, Cricket live score . Like us on Facebook or follow us on Twitter for more sports updates. You can also download the NDTV Cricket app for Android or iOS.