Arsenal midfielder Aaron Ramsey was sent off with 10 minutes left in the first leg match against Besiktas in Istanbul after being shown a second yellow card for tugging Oguzhan Ozyakup's shirt. 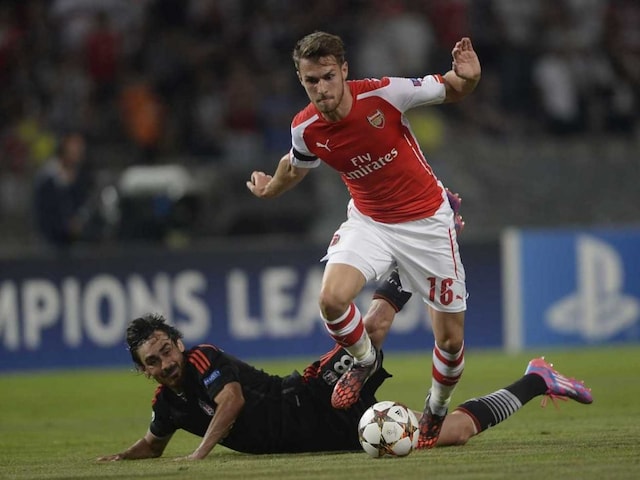 Arsenal held on with 10 men to draw 0-0 at Besiktas in the Champions League playoff round on Tuesday, while Bayer Leverkusen is better placed to reach the group stage after winning 3-2 at FC Copenhagen.

Arsenal midfielder Aaron Ramsey was sent off with 10 minutes left in the first leg match in Istanbul after being shown a second yellow card for tugging Oguzhan Ozyakup's shirt.

"For me it's unbelievable to get the second yellow card when you see the kind of fouls they have made today. It's not serious," Arsenal manager Arsene Wenger said on Britain's ITV television.

The London club, which has played in every group stage since the 1998-99 season, still nearly grabbed a late winner when Alex Oxlade-Chamberlain's shot was turned onto the post.

The highest-scoring match of the night was in Denmark with Leverkusen holding the away goals advantage going into next Wednesday's home leg. The other matches saw Athletic Bilbao draw 1-1 at Napoli, Red Bull Salzburg beat Malmo 2-1 and Steaua Bucharest edge Ludogorets Razgrad 1-0.

At the Ataturk Olympic Stadium, a familiar face nearly embarrassed Arsenal from the kickoff. Former Chelsea striker Demba Ba lobbed the ball from the halfway line and it was looping into the top corner until goalkeeper Wojciech Szczesny pushed it onto the crossbar.

With striker Olivier Giroud lacking cutting edge in front of goal and new signing Alexis Sanchez denied by Tolga Zengin's save before halftime, Arsenal rarely looked like repeating its 3-0 victory across Istanbul against Fenerbahce in last year's playoff round.

Besiktas came closest in the second half when Olcay Sahan curled a shot wide after breaking into the box. And, after Ramsey's red card, Besiktas coach Slaven Bilic also saw red in a heated conclusion on the touchline.

"It's one of the most physical games we have played in the Champions League," Wenger said. "We had the chance to win the game, but unfortunately we couldn't do it."

Next week at the Emirates, although Ramsey will be suspended, Wenger is set to deploy German World Cup-winning trio Mesut Ozil, Per Mertesacker and Lukas Podolski again after their break.

"They will be without Ramsey who for me is the top man in the team," Bilic said. "We are still alive and we go to the Emirates with even more confidence ... we have a plan we have a dream."

In Copenhagen, Stefan Kiessling took just five minutes to put Leverkusen in front, but the hosts hit back with Mathias Jorgensen nodding in an equalizer from a corner and Daniel Amartey heading them in front in the 13th minute.

Parity was restored in the 31st when Karim Bellarabi knocked the ball into the net and Son Heung-min secured Leverkusen's valuable away win just before half time after meeting Hakan Calhanoglu's throughball.

In Austria, goals from Franz Schiemer and Jonatan Soriano looked to have given Salzburg a clear cushion going into the second leg until Emil Forsberg pulled one back for Malmo in the 90th minute.

Iker Muniain's away goal could also prove decisive for Bilbao even though Gonzalo Higuain ensured Napoli drew 1-1 at home.

The only goal of the night in Romania took until the 88th minute to come, with Alexandru Chipciu, who had already missed a penalty, striking into the net this time for Steaua against Ludogorets of Bulgaria.

Comments
Topics mentioned in this article
Arsenal Bayer Leverkusen Football
Get the latest updates on IPL 2020, check out the IPL Schedule for 2020 and Indian Premier League (IPL) Cricket live score . Like us on Facebook or follow us on Twitter for more sports updates. You can also download the NDTV Cricket app for Android or iOS.