Manchester City defender Pablo Zabaleta has warned Viktoria Plzen there will be no let-up from his free-scoring team in Wednesday's Champions League clash at Eastlands. 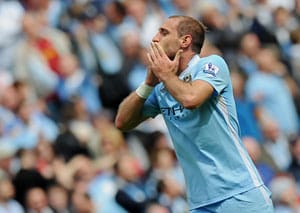 Manchester City defender Pablo Zabaleta has warned Viktoria Plzen there will be no let-up from his free-scoring team in Wednesday's Champions League clash at Eastlands.

City have scored 18 goals in their last three home games as Norwich, CSKA Moscow and, most impressively, Tottenham have all been put to the sword in east Manchester.

Manuel Pellegrini's side -- 6-0 winners against Spurs on Sunday - are already assured of their place in the last 16 of the Champions League and it would be understandable if they took it easy ahead of their next Premier League fixture against Swansea on Sunday.

But, with first place in Group D still a slender possibility if leaders Bayern Munich slip up against CSKA Moscow, City's Argentine right-back Zabaleta believes they should keep their foot on the gas against the Czech minnows.

"We know the quality we have in the front players. They can score at any time in the game," Zabaleta said.

"That is why we always talk about how important it is to keep clean sheets.

"If we do that we know we are going to score some goals.

"Obviously you don't expect to win 6-0 against a very strong team like Tottenham. Sometimes it happens. And on this occasion we deserved it."

While there are still justifiable concerns about City's ability to reproduce their free-scoring form away from Eastlands, Pellegrini's team are playing with a stylish swagger on their own turf that is likely to easily overwhelm Plzen.

Netting 26 times in six home league games is reason enough for optimism that City can wrestle the Premier League title back from Manchester United, and also mount a strong run in the knock-out stages of the Champions League.

Finishing top of the group would help that goal, as it would give City an easier draw in the last 16, but Pellegrini, whose team are three points behind Bayern, conceded he must juggle the desire to go for first place with the knowledge that his players need careful management before the hectic December programme.

"We have a lot of games in December, nine games in the Premier League in 35 days when we have played 11 games in two and a half months," he said.

"These 27 points are very important for us to be near the top of the table.

"We have also to continue in League Cup, so the target is to be near the top of the table and continue in cup.

"In the Champions League we achieved our target already but we will see what happens with Bayern in Moscow and we must win here against Plzen."

Pellegrini is likely to rest several of the architects of Sunday's Tottenham demolition, with the likes of Sergio Aguero, Jesus Navas and Yaya Toure possibly set for a rest.

The City boss has already confirmed Joe Hart will return in goal on Wednesday after exactly a month on the sidelines.

England international Hart was dropped following his crucial blunder at Chelsea which led to Fernando Torres scoring the winning goal in a 2-1 victory for Jose Mourinho's side on October 27.

Costel Pantilimon has performed well in place of Hart, but will return to the bench for the meeting with the Czech side.

Plzen have already been eliminated from the race to qualify for the last 16 after losing all four of their group matches, including a 3-0 defeat at home to City in September.