FC Barcelona and RB Leipzig sealed their spots in the round of 16 of the Champions League while Liverpool and Chelsea will have to wait for the final round of group stage matches. 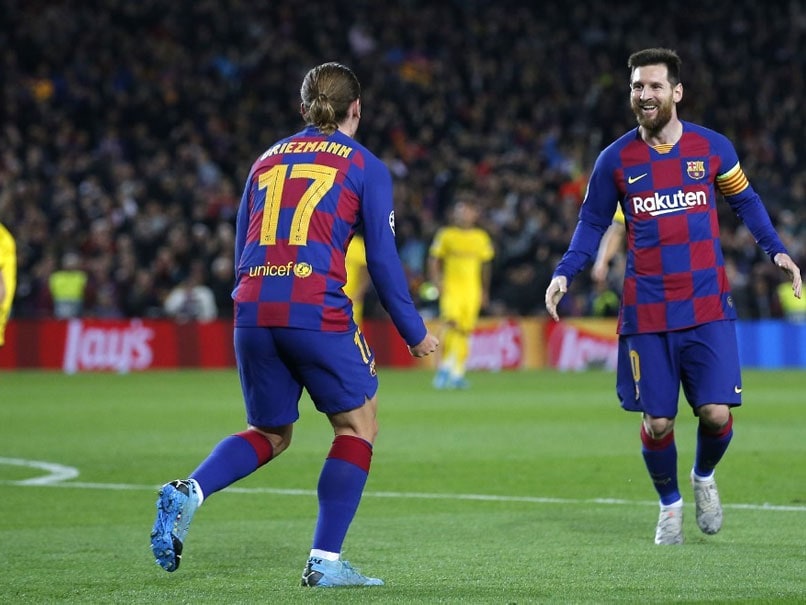 Lionel Messi scored a goal and made two assists in Barcelona's 3-1 win over Borussia Dortmund.© AFP

A Lionel Messi-inspired Barcelona booked their place in the Champions League knockout stages on Wednesday by crushing a desperate Borussia Dortmund 3-1, while RB Leipzig made the last 16 for the first time with an incredible stoppage time comeback. Lucien Favre's position as Dortmund coach looks increasingly in peril following the thumping at the Camp Nou, orchestrated by a sensational Messi, that ensured Barca's progress to the last 16 as Group F winners and leaves the Germans in danger of not qualifying.

The Argentine scored one and set up the other two for Luis Suarez and Antoine Griezmann to inflict a punishing defeat on Dortmund and move up to 11 points, four ahead of the Germans and Inter Milan, who won 3-1 at Slavia Prague.

"He (Messi) was incredible," said Barcelona coach Ernesto Valverde. "It's all about what he does and when he does it. It was a performance to put us through."

Messi got the ball rolling with a neat pass which allowed Suarez to open the scoring in the 29th minute, before the Uruguayan returned the favour four minutes later to lay on Messi for his 613th Barca goal on his 700th appearance.

Messi, who has scored 10 times in his last nine games, was also at the heart of the goal which extinguished Dortmund's hopes of a result in the 67th minute, slipping a wonderful through ball for Griezmann that the Frenchman could happily stroke first time past Roman Burki.

Dortmund slip down to third behind Antonio Conte's Inter side, who roared to a fine win which keeps alive their hopes of a place in the next round.

Romelu Lukaku's first Champions League goal for Inter and a Lautaro Martinez double saw off a spirited Slavia side that had levelled in the 37th minute through a VAR-awarded Tomas Soucek penalty after Lukaku thought he had doubled his side's lead.

Lukaku had another strike ruled out for offside by VAR in the dying moments, but it made no difference to the result and now a win over Barca at the San Siro next month will guarantee them a place in the last 16.

"We've given meaning to the match with Barca by winning tonight," said Conte.

"We are expecting a tough, great match, but we know that we can count on 80,000 people who will come to the stadium to push us on."

Leipzig back from the dead

Leipzig made the knockout stages in dramatic style after Emil Forsberg fired them back from two goals down in the final minute to draw 2-2 with Benfica.

The Germans needed a point to qualify but looked down and out as the match dragged towards added time, but Forsberg pulled a goal back from the penalty spot in the 90th minute before hitting the leveller six minutes later, sparking wild celebrations.

"Reaching the knockout stages for the first time in the club's history means that we're doing the right things and moving in the right direction. I'm just so proud," said Forsberg.

The draw gave Lyon a big let-off after they failed to snatch a knockout spot when they fell to 2-0 defeat at Zenit Saint Petersburg.

Rudi Garcia's team looked in peril of not qualifying at all from Group G after the loss but Leipzig's last gasp efforts mean they will go through with a win over the Bundesliga side on December 10.

Liverpool and Napoli were made to wait for their spots with a tense 1-1 draw at Anfield.

Dries Mertens opened the scoring with a sweetly struck opener midway through the first half, before Dejan Lovren's header salvaged a point to keep the Reds top of Group E.

However the European champions still need to get at least a point away to Salzburg next month to secure their passage into the last 16, while Napoli need a draw with bottom side Genk to claim their spot.

Ajax also need a point to go through thanks to a 2-0 win at Lille that featured the fastest goal of this year's competition to open a two-point lead at the top of Group H.

Hakim Ziyech netted after 94 seconds at eliminated Lille with Quincy Promes hitting his fourth of the tournament on the hour mark.

Four-time European champions Ajax have 10 points from five games, two more than Valencia and Chelsea who fought out a hugely entertaining 2-2 draw in Spain earlier in the day.

Ajax host Valencia in their concluding fixture next month, while Chelsea welcome Lille to Stamford Bridge knowing a win would be enough to ensure their place in the draw.

Lionel Messi
Get the latest updates on IND vs NZ 2021, check out the Schedule and Live Score . Like us on Facebook or follow us on Twitter for more sports updates. You can also download the NDTV Cricket app for Android or iOS.