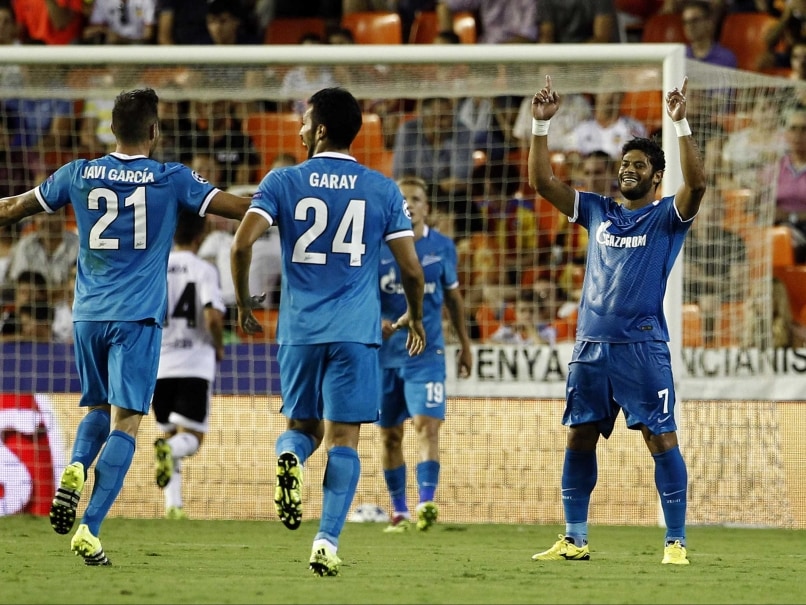 Hulk thumped home two powerful efforts to give the Russians a 2-0 half-time lead before Joao Cancelo and Andre Gomes hauled Valencia level after the break.

However, the home side's good work was undone when Axel Witsel struck the winner moments later to give Andres Villas-Boas's men the perfect start in Group H. (AS Roma Hold FC Barcelona)

Zenit lead Gent and Lyon by two points after the Belgians salvaged a point with nine men in a 1-1 draw in the other match in the group.

Valencia had started the stronger as a Cancelo drive from distance deceived Yuri Lodygin and came back off the post.

However, the hosts were stung after just seven minutes by a flowing counter-attack from the Russian champions as Hulk received the ball on his favoured left foot and arrowed a shot into the far corner. (Chelsea Hammer Maccabi | Arsenal Stunned)

The Spanish side were dominant in possession but struggling to create clear-cut chances and were left frustrated when Scottish referee Craig Thomson turned down a strong penalty appeal for a handball by Javi Garcia.

Zenit then doubled their advantage in spectacular fashion just before half-time when Hulk took aim from 25 yards and thumped the ball past the helpless Jaume Domenech.

Valencia boss Nuno Espirito Santo made a double substitution at the break as Paco Alcacer and Gomes were introduced and both made their presence felt as the hosts roared back in the second-half.

Alcacer had a goal narrowly ruled out for offside before Cancelo did half the arrears with an intelligent hit from a narrow angle which caught Lodygin by surprise.

Gomes pulled a volley wide from the edge of the area as the pressure from Valencia continued to build.

And the Portuguese midfielder then levelled 17 minutes from time with a neat turn and shot that Lodygin should have made a better fist of keeping out.

Yet, just when it seemed Valencia were in pole position to complete a famous comeback, Zenit struck the winner as Witsel was left unmarked on the edge of the area and his low drive found the net via the inside of the far post.

Comments
Topics mentioned in this article
Hulk Zenit St. Petersburg Valencia Football
Get the latest updates on IND vs NZ 2021, check out the Schedule and Live Score . Like us on Facebook or follow us on Twitter for more sports updates. You can also download the NDTV Cricket app for Android or iOS.