Chelsea F.C. had drawn Schalke in the Champions League opener and were guilty of squandering several chances against Sporting Lisbon as well. 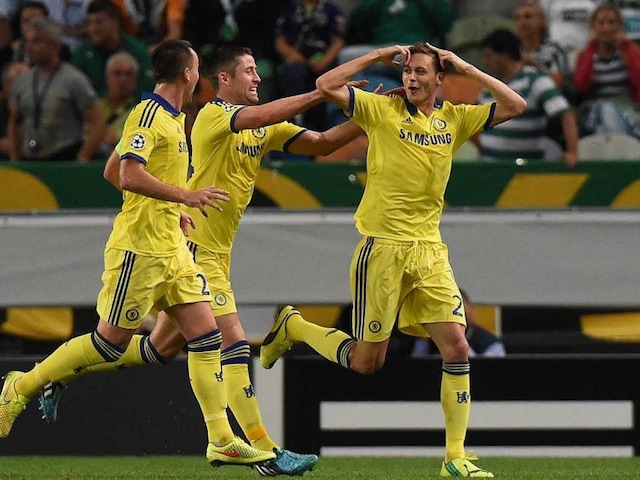 Nemanja Matic gave Chelsea its first Champions League win of the season with a first-half goal securing a 1-0 victory at Sporting Lisbon on Tuesday.

A Cesc Fabregas free kick from the left in the 34th minute floated over the Sporting defense to the back post, where Matic sent a looping header over goalkeeper Rui Patricio.

The London club's slim margin of victory belied its dominance of the Group G game, with a series of wasted chances in similar fashion to Chelsea's 1-1 home draw against Schalke in its group opener.

Sporting went close to equalizing during a second-half resurgence with Nani, on loan from Manchester United, leading the way.

"We had so much control and so many chances that the result ... didn't reflect what happened. Sporting was good at staying in the game," Chelsea coach Jose Mourinho said. "The result was in doubt until the end, but we're satisfied with the three points."

Chelsea, the European champion in 2012, has four points. The young Sporting lineup, which has fewer Champions League appearances combined than the 100 racked up by Blues captain John Terry, has one point.

While group favorite Chelsea didn't make the most of its opportunities, Sporting had Patricio to thank for keeping the home team in the game with a string of spectacular saves that denied Diego Costa, Andre Schurrle and Mohamed Salah.

At the final whistle Mourinho, playing against a club where he was an assistant to Bobby Robson in the early 1990s, walked across the pitch to congratulate the Portugal goalkeeper.

"I don't remember ever seeing him play such a key role," Mourinho said of Patricio. "He was fantastic."

Chelsea missed its first chance in the second minute when Costa beat Sporting's offside trap and ran 25 meters (yards) toward Patricio, who stuck out a leg and sent the ball over the bar.

Patricio then got the better of Schurrle three times in seven minutes.

After its jittery start, Sporting - unbeaten in its last 16 European home games and winner of its last three home games against English clubs - gradually regained its composure. Islam Slimani and Adrien Silva worried the Chelsea defense in the final stages of the first half.

Sporting was stronger after the interval, but lacked sophistication in front of goal. Nani had Sporting's best chance in the 55th when, unmarked on left, he ran in and hit the ball into the side netting.

Sensing the danger, Mourinho brought on Willian and John Obi Mikel to help hold Chelsea's advantage while keeping Costa on the pitch despite his lingering hamstring problems.

In the last 10 minutes, Patricio again got in Chelsea's way, stopping Costa and Mohamed Salah on the break.

Comments
Topics mentioned in this article
Chelsea Sporting Lisbon Nemanja Matic Cesc Fabregas Football
Get the latest Cricket news, check out the India cricket schedule, Cricket live score . Like us on Facebook or follow us on Twitter for more sports updates. You can also download the NDTV Cricket app for Android or iOS.