Liverpool striker Andy Carroll has joined West Ham on loan for a period of one year. 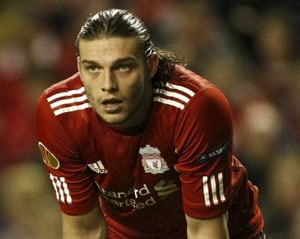 Liverpool striker Andy Carroll has joined West Ham on loan for a period of one year.

The 23-year-old, who has been named in the England squad for a couple of friendlies recently, doesn't fall in the scheme of things for Liverpool manager Brendan Rodgers currently and was prompted to move from the club.

Liverpool, meanwhile, have signed up young German striker Samed Yesil from Bayer Leverkusen for a reported fee of nearly £1 million. They are also on the lookout for Arsenal's Theo Walcott and Fulham striker Clint Dempsey before the transfer window comes to a close.

Comments
Topics mentioned in this article
Clint Dempsey Andy Carroll Football Arsenal Liverpool Chelsea Steven Gerrard Everton Birmingham City
Get the latest Cricket news, check out the India cricket schedule, Cricket live score . Like us on Facebook or follow us on Twitter for more sports updates. You can also download the NDTV Cricket app for Android or iOS.