A four-week feast of football in the spiritual homeland of the sport gets under way in the seething mega-city of Sao Paulo, where FIFA World Cup host nation Brazil face Croatia at 5pm local time (2000 GMT).

The most trouble-plagued World Cup in history kicks off on Thursday with Brazilian organisers hoping for a carnival but bracing for chaos after a torrid build-up underscored by public anger at the tournament's multi-billion-dollar price tag. (FIFA World Cup: Comprehensive coverage) A four-week feast of football in the spiritual homeland of the sport gets under way in the seething mega-city of Sao Paulo, where host nation Brazil face Croatia at 5pm local time (2000 GMT). (Seen the amazing team plane of Brazil? | More pics from FIFA World Cup)

The start of the four-yearly extravaganza is the acid test for organisers and football's governing body FIFA, who have been scrambling to get Brazil ready for the biggest event in sport outside of the Olympics. (Related read: Jennifer Lopez to perform at World Cup opener)

The first of 64 matches which culminate with the July 13 final in Rio de Janeiro will be staged in the Corinthians Arena, a venue which has become emblematic of a build-up besieged by setbacks.

Construction of the $424 million (313m euros) venue ground to a halt in November when a giant crane toppled over and killed two workers. A third labourer died in an accident in March. In total eight workers have died while racing to complete World Cup-related projects.

The 61,600-capacity arena is one of 12 World Cup stadiums that were due to be ready by the end of December. Six missed the initial deadline, with final delivery to FIFA eventually coming in late May. (Goalline Technology Arrives: Debate Should End at FIFA World Cup)

Only this week, workers could be seen busily wiping seats, checking beams and installing wiring just days before the opener, which will be attended by 12 heads of state, United Nations Secretary General Ban Ki-Moon and assorted VIPs.

Yet FIFA officials are bullishly backing Brazil, with President Sepp Blatter, under-fire over corruption allegations rocking the global governing body, confident the country will unite behind the tournament.

"We at FIFA, we are confident, it will be a celebration," said Blatter. "After the tournament kicks off I think there will be a better mood."

But the spectre of social unrest and transport chaos looms large. A strike by Sao Paulo subway workers demanding better pay last week brought the city to a standstill, and led to baton-wielding riot police firing teargas to break up protesters before the walkout was suspended on Monday.

Union leaders have threatened to resume the strike during the tournament if their demands are not met. On Tuesday, subway workers in Rio de Janeiro, which hosts seven games including the final, threatened similar action.

Authorities are nervously eyeing the possibility of a repeat of nationwide protests that exploded around the FIFA Confederations Cup last year.

The estimated $11 billion Brazil is spending on the tournament has angered many in a country grappling with chronically under-funded health and public services, poor transport and violent crime.

The rapid spread of last year's protests caught Brazilian authorities off-guard, and a massive security blanket will be draped across the World Cup in an effort to avoid a repeat of the clashes.

Around 150,000 police and soldiers and some 20,000 private security officers will be deployed across the 12 host venues to counter protesters whose slogan is "the Cup will not take place."

In April, Rio's famous Copacabana district witnessed violent clashes after residents of a nearby favela accused police of shooting dead a man from their neighbourhood.

Brazil's leftist leader Dilma Rousseff has hit out at what she described as a "systematic campaign" against the tournament.

"Brazil is ready on and off the pitch," she said in a televised address late Tuesday.

"The pessimists .. have been defeated by the hard work and determination of the Brazilian people, who never give up."

But resentment at the vast amounts lavished on the tournament -- Brazil is believed to be the most expensive World Cup in history -- remains.

Brazil's footballers themselves were targeted by striking teachers as they set off for their training camp outside Rio last month.

"An educator is worth more than Neymar," teachers chanted, referring to the team's star striker.

Despite the off-field problems, the tournament itself promises to be a classic. 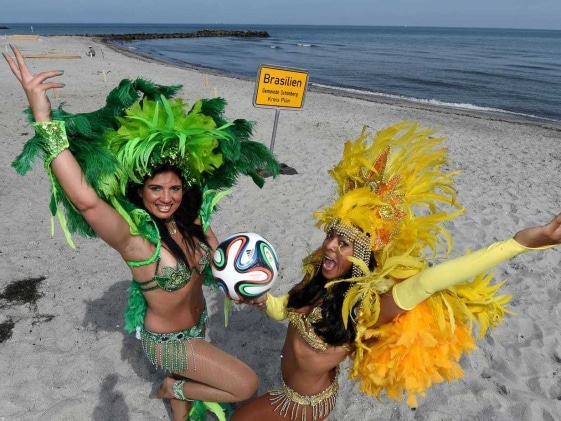 From dramatic backdrops such as Rio de Janeiro's famed Sugarloaf Mountain to Manaus in the heart of the Amazon, the World Cup promises to showcase the vast diversity of Brazil.

Defending champions Spain are bidding to make history by becoming the first side from Europe to win a World Cup in South America.

Vicente del Bosque's side have dominated international football for the past six years, winning two consecutive European championships either side of their memorable triumph at the 2010 World Cup.

Brazil, chasing a record sixth World Cup, host the tournament for the first time since their loss to Uruguay in the climax of the 1950 finals, when their neighbours inflicted a defeat which became a national trauma.

Brazil will look to the skills of striker Neymar -- player of the tournament at the Confederations Cup last year -- to provide the attacking flair.

If Neymar shines, the tournament could become a duel between him and his Barcelona team-mate, Lionel Messi.

The Argentine maestro has had a quiet year by his standards, losing his FIFA Ballon D'Or crown to Portugal's Cristiano Ronaldo, in an injury-hit season.

But Messi has excelled in the famous blue-and-white shirt since being handed the captaincy by coach Alejandro Sabella, and will be aiming to erase the memory of a disappointing 2010 tournament.

Argentina and Brazil could meet in the July 13 final at the refurbished Maracana Stadium, if the European challenge led by Spain falters.