Dortmund dislodged Bayern, who beat Hanover 96 2-0, from the top of the table after a 6-2 victory over Hamburg. 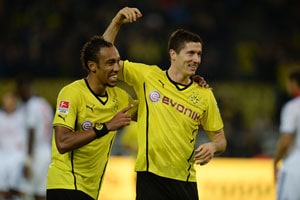 Borussia Dortmund stormed back to the top of the Bundesliga on Saturday with a 6-2 romp at home to Hamburg to knock European champions Bayern Munich from first place.

"That was simply awesome, it was fun just to watch," beamed Dortmund coach Jurgen Klopp.

"Towards the end, my heart was singing and apart from the two goals we conceded, we defended well."

Borussia raced into a 2-0 lead after 22 minutes as Aubameyang celebrated his first start with the opening goal before fellow new signing Henrikh Mkhitaryan added the second.

Hamburg responded as defender Zhi-Gin Lam scored his first goal with a thunderbolt from outside the area on 26 minutes, before centre-back Heiko Westermann headed the second on 49 minutes.

But Dortmund then hit top gear as Aubameyang grabbed his second by burying Mkhitaryan's pass before the Gabon winger set up Lewandowski for Dortmund's fourth.

With Hamburg's defence in disarray, Germany winger Marco Reus slotted past goalkeeper Rene Adler, then Lewandowski compounded the guests' misery when he headed the sixth just shy of the final whistle.

Borussia remain the only Bundesliga side with a 100 percent record after five games ahead of Wednesday's trip to Napoli in their Champions League opener. 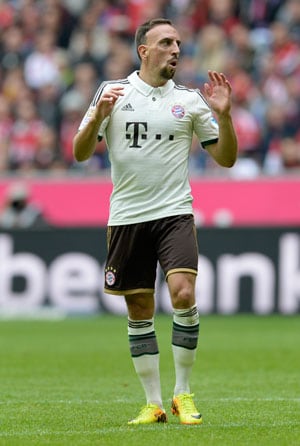 It was the ideal preparation for Pep Guardiola's team who begin their Champions League campaign at home to CSKA Moscow on Tuesday, but director of sport Matthias Sammer was far from happy.

"We play football without emotion, we're just going through the motions, we have to get out of this comfort zone," fumed Sammer.

"The coach shouldn't have had to give a fiery speech before the game to fire the players up."

Bayer Leverkusen, who launch their Champions League campaign at Manchester United on Tuesday, warmed up for their Old Trafford clash with a convincing 3-1 win over 10-man VfL Wolfsburg to stay third.

"I'm happy with the second-half performance, we ran around too much early on, but we were better after the break and could have had more goals," said coach Sami Hyypia.

Stefan Kiessling netted twice to give Leverkusen their fourth win from their opening five games, heading home on 65 minutes before slamming in his second in added time.

Wolfsburg were reduced to 10 men when ex-Bayern Munich midfielder Luiz Gustavo was sent off in the final 10 minutes, for the second time this season.

The Brazilian had only just returned from suspension after being dismissed in the 2-0 defeat at Mainz at the end of August.

Schalke 04, who host Steaua Bucharest in the Champions League on Wednesday, continued their revival by picking up their second victory.

New signing Kevin-Prince Boateng hit the first-half winner in only his second league match since arriving from AC Milan.

"We're up for it, that's obvious. We were defensively very strong at Mainz," said Boateng.

"If we produce the same against Steaua, we can get another positive result."

The victory lifts the Royal Blues up to eighth, while Mainz are fifth.

Werder Bremen crashed to their third consecutive defeat when they went down 3-0 at home to Eintracht Frankfurt.

Augsburg needed a 90th-minute winner from midfielder Tobias Werner to seal a 2-1 win at home to Freiburg while on Friday VfB Stuttgart earned a 1-0 win in the capital against Hertha Berlin, picking up their second win under caretaker coach Thomas Schneider.