The FIFA World Cup will begin June 12 when hosts Brazil meet Croatia in their Group A clash at the 70,000-seat Itaquerao stadium. 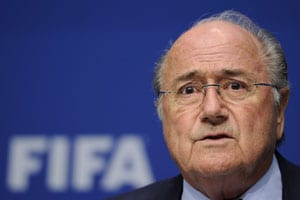 FIFA President Blatter has backed Brazil to pull off a good show in the World Cup.

FIFA president Sepp Blatter has insisted Brazil is ready to host the World Cup, less than a week before football's showpiece event kicks off in Sao Paulo.

Preparations for the June 12-July 13 tournament have been hit by construction delays, budget overruns, protests and strikes, reports Xinhua.

But speaking to the media here on Thursday, Blatter vowed the country would stage a successful event.

"We at FIFA, we are confident, it will be a celebration," Blatter said, adding that he was not worried about the threat of more protests.

"I'm an optimist," he said. "After the tournament kicks off I think there will be a better mood."

FIFA's secretary general Jerome Valcke said the 12 host venues were ready for the first fortnight of the event, which he described as the most difficult for organisers.

"There are no risks for the opening weeks of the competition which are the most challenging because there are the most teams," he said.

"We are in control, we have nothing to fear in the coming days."

The World Cup will begin June 12 when hosts Brazil meet Croatia in their Group A clash at the 70,000-seat Itaquerao stadium.