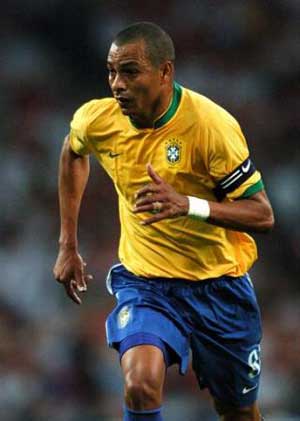 The 36-year-old, contracted with Gremio until December, agreed to join Atletico on a one-year deal beginning in January, reports Xinhua.

"I was told Tuesday that Gilberto Silva is going back to Atletico and we will accept his decision. We hope that he is happy at his new club," Gremio's incoming football director Rui Costa said.

Despite playing most of his career as a holding midfielder, Gilberto has excelled as a central defender since joining Gremio last year from Panathinaikos.

Gremio reportedly wants to replace Gilberto with Uruguay captain Diego Lugano, who is out of favour under Paris Saint-Germain manager Carlo Ancelotti.

Gilberto played every match in Brazil's triumphant 2002 World Cup campaign and captained the South American's to victory at the 2006 Copa America.

He was also a member of Arsenal's 2003-04 "invincibles" team which won the English Premier League without losing a match.

He played 62 matches in two seasons with Atletico Mineiro before joining Arsenal in 2002.

Comments
Topics mentioned in this article
Brazil Football
Get the latest Cricket news, check out the India cricket schedule, Cricket live score . Like us on Facebook or follow us on Twitter for more sports updates. You can also download the NDTV Cricket app for Android or iOS.