Liverpool face Spanish side Sevilla on Sunday at Boston's Fenway Park baseball stadium in the second game of their three-match US tour. 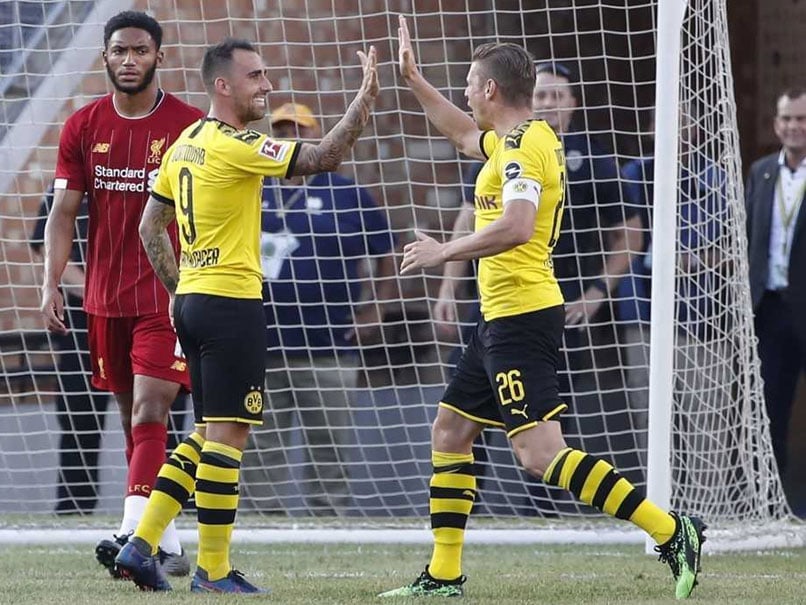 Danish internationals Thomas Delaney and Jacob Bruun Larsen scored second half goals as Borussia Dortmund handed Liverpool a 3-2 defeat in the opening game of the Premier League giants pre-season US tour on Friday. In sweltering heat at Notre Dame Stadium in South Bend, Indiana, Bundesliga side Dortmund punished a rusty defensive display from the European champions, who were missing several star players. Brazilian internationals Roberto Firmino and Alisson were both absent for Liverpool following their Copa America campaign along with Mohamed Salah and Sadio Mane, both missing due to the Africa Cup of Nations.

Liverpool manager Jurgen Klopp opted for a a youthful starting line-up against his former club before making 10 changes in the second half.

Dortmund took the lead after only three minutes when Paco Alcacer capitalised on some hesitant defending from Liverpool defender Nathaniel Clyne to rifle home from close range.

Liverpool soon began to carve out openings of their own however, and the lively Ryan Kent and Harry Wilson always looked threatening.

Kent almost equalised in the 10th minute after a driving run by Alex Oxlade-Chamberlain.

Oxlade-Chamberlain's pass to the back post was perfectly weighted but Kent's shot was blocked after a superb diving save from Dortmund goalkeeper Martin Hitz.

Hitz needed to be alert soon afterwards, when a fine through ball by James Milner released Wilson.

Wilson latched onto the pass and shot for goal, but Hitz had read the danger, advancing off his line to save.

Liverpool finally drew level with a cleverly worked goal in the 35th minute.

Again, Kent and Wilson were involved.

Fabinho's pass into the area was brilliantly dummied by Kent into the path of Wilson, who calmly stroked home the finish.

But despite the bright opening 45 minutes, Liverpool were soon trailing again early in the second half as Dortmund once more seized on sloppy defensive play to score two quick goals.

Delaney, one of nine Dortmund changes made at half-time, made it 2-1 in the 53rd minute after Liverpool's defence were caught square.

That goal was the cue for Klopp to make wholesale substitutions of his own, removing all 10 outfield players on the one hour mark.

A Rhian Brewster penalty in the 75th minute after Ben Woodburn was brought down cut Dortmund's lead to a single goal.

But Liverpool were unable to find an equaliser in the closing stages.

Liverpool face Spanish side Sevilla on Sunday at Boston's Fenway Park baseball stadium in the second game of their three-match US tour.

Sevilla Paco Alcácer Thomas Delaney Alex Oxlade-Chamberlain Mohamed Salah Sadio Mane Football
Get the latest updates on IPL Auction 2023 and check out  IPL 2023 and Live Cricket Score. Like us on Facebook or follow us on Twitter for more sports updates. You can also download the NDTV Cricket app for Android or iOS.