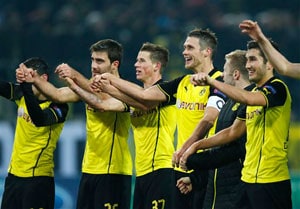 Last season's finalists Borussia Dortmund breathed life into their hopes of reaching the Champions League knock-out phase with a nervous 3-1 home win over Napoli on Tuesday.

An early Marco Reus penalty and second-half strike by Jakub Blaszczykowski put Dortmund 2-0 up with an hour gone before Lorenzo Insigne pulled one back for Napoli with 20 minutes left.

Substitute Pierre-Emerick Aubameyang came on to grab Dortmund's third, 12 minutes from time, to calm nerves and put Borussia level on nine points with Napoli in the group behind leaders Arsenal.

The victory at Dortmund's Westfalenstadion avenged Borussia's 2-1 defeat at Napoli in September and gives them hope of reaching the last 16 following their 1-0 home defeat by Arsenal three weeks ago.

"We couldn't have done more to set things up for the last game."

With the Gunners three points clear, who will qualify from Group F will now be decided by the final round of pool matches when Dortmund travel to Marseille and Napoli host Arsenal in a fortnight

Having lost his entire back four to injury, Borussia coach Jurgen Klopp moved defensive midfielder Sven Bender to centre-back alongside Greece international Sokratis with his first-choice pairing of Mats Hummels and Neven Subotic ruled out.

Dortmund got an early breakthrough when Federico Fernandez hauled down Poland striker Robert Lewandowski in the area and Germany's Reus stepped up to drill home the penalty after 10 minutes.

Just eight minutes later, Reus forced Napoli goalkeeper Pepe Reina into a diving save when he curled in a free-kick.

The first half was a nervy affair and with half an hour gone Napoli hit the post when Jose Callejon jinked inside Bender and beat Dortmund goalkeeper Roman Weidenfeller.

At the other end Lewandowski fired wide and forced Reina into one of his many fine saves in the Napoli goal.

Dortmund desperately needed a second goal to calm their nerves and there were anxious glances at Westfalenstadion when Gonzalo Higuain was put clear in the area, but Weidenfeller blocked his half volley.

Less than a minute later, Borussia grabbed their second when Dortmund swept forward on the counter-attack.

Reus broke down the left and found Poland winger Blaszczykowski unmarked to slot the ball between Reina's legs with a first time shot on 60 minutes.

Rafael Benitez's Napoli got back in the game with a superb goal on 70 minutes after Higuain pounced on a loose pass and with Weidenfeller off his line, Insigne fired home from a tight angle.

Only another excellent save from Reina denied Dortmund Aubameyang, but the Gabon winger found the net soon after.

The third goal could prove crucial in the head-to-head stats should Dortmund and Napoli finish level after the final round.

Comments
Topics mentioned in this article
Football Jakub Blaszczykowski Marco Reus Pierre-Emerick Aubameyang
Get the latest Cricket news, check out the India cricket schedule, Cricket live score . Like us on Facebook or follow us on Twitter for more sports updates. You can also download the NDTV Cricket app for Android or iOS.