David Beckham has reached the grand finale of his five-year Hollywood saga. The English superstar will play for his first Major League Soccer title on Sunday with the Los Angeles Galaxy, hoping to lift the MLS Cup alongside Landon Donovan in vindication of his groundbreaking American experiment. 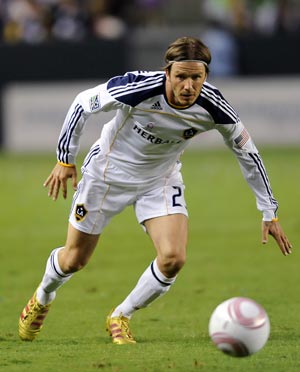 David Beckham has reached the grand finale of his five-year Hollywood saga.

The English superstar will play for his first Major League Soccer title on Sunday with the Los Angeles Galaxy, hoping to lift the MLS Cup alongside Landon Donovan in vindication of his groundbreaking American experiment.

After posting his best season in the U.S. during the Galaxy's dominant campaign, the midfielder needs just one more victory to earn something he didn't even realize he wanted when he moved to Los Angeles amid all that fanfare in 2007.

"It's only the last year or two that I started to understand the playoff system, to be honest," Beckham said with a grin. "It's something I've got used to now. We've had success in the last three years, but we want the big one. We want the MLS Cup."

For the second straight season, the star-studded Galaxy won the Supporters' Shield as MLS' best regular-season team, which would be the ultimate achievement in any other big league. Los Angeles then rolled to three straight playoff victories, and now they're favored in the final against the resilient Houston Dynamo, who must play without injured star Brad Davis.

The neutral-site game serendipitously will be played at Home Depot Center, the Galaxy's home pitch south of downtown Los Angeles. Although the Dynamo are eminently capable of ruining the Galaxy's special day, the stage is set perfectly for Beckham's coronation.

"I felt I'd achieved all I could achieve in Europe, and I wanted another challenge," said Beckham, who finished second in MLS with 15 assists this season before providing similar service in every playoff game. "My experience has been amazing. I've been able to play with some great players. It's gone by really quickly, but I've enjoyed it. ... Of course I want to win the Cup on Sunday, but it's more important for the team that we win it."

Indeed, a victory in Los Angeles' record seventh final appearance would be a vindication of the Galaxy's star-centered approach to winning in its slow-growth league.

No MLS team has ever won a championship with a designated player - the salary-cap exception created so Los Angeles could sign Beckham to a $32.5 million deal. Donovan and the Galaxy's new Irish striker Robbie Keane - who will return to Los Angeles' lineup after international duty - also are designated players, and much of the league has now taken advantage of the rule in the past two seasons.

This big finish might only be the setup for a sequel for Beckham, who says he'll decide after the season where he'll play next year. While Paris Saint-Germain and a few British clubs are interested, the Galaxy are eager to retain him as the centerpiece of their lucrative new 10-year television deal.

Beckham and his famous family love living in Los Angeles, and the Galaxy also might be the best fit for Beckham's hopes of playing for England at the London Olympics.

"We've lived a pretty normal life," Beckham said before recanting a story about driving his children to breakfast earlier this month and being stunned to see Al Pacino walking around in his neighborhood. "Living in California is something special, and we've enjoyed that."

Comments
Topics mentioned in this article
Football Brad Davis Dynamo Kiev David Beckham Jeremy Lin
Get the latest Cricket news, check out the India cricket schedule, Cricket live score . Like us on Facebook or follow us on Twitter for more sports updates. You can also download the NDTV Cricket app for Android or iOS.