Jupp Heynckes will take over the reins from sacked Carlo Ancelotti, who lost his job last week after a stuttering start to the season and a 3-0 Champions League defeat by Paris Saint-Germain. 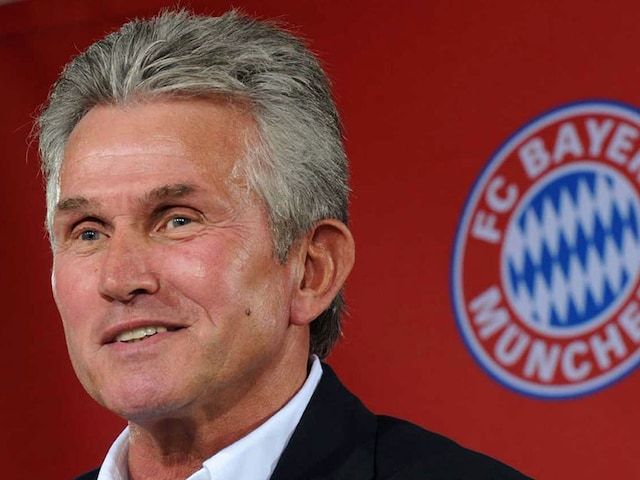 Jupp Heynckes had led Bayern Munich to a treble in 2013.© AFP

After four years in retirement, Jupp Heynckes returned to Bayern Munich for a fourth stint as head coach on Friday in the hope of bringing the 2013 glory days back to the Bavarian giants. This is the 72-year-old's first coaching job since steering Bayern to the 2013 treble, the first and only time a German side have won the Bundesliga, Champions League and German Cup titles in a single season. Heynckes first led Bayern from 1987 to 1991, then briefly in 2009 as caretaker, and from 2011 until 2013. He takes over the reins from the sacked Carlo Ancelotti, who lost his job last week after a stuttering start to the season and a 3-0 Champions League defeat by Paris Saint-Germain.

"There is a strong relationship of trust between Jupp Heynckes and FC Bayern," said club chairman Karl-Heinz Rummenigge.

"He is at the moment the ideal coach for Bayern."

Heynckes will be assisted by the current co-trainer of Fortuna Duesseldorf, Peter Hermann, and the current sports director of Bayern's youth team, Hermann Gerland.

It was along with Hermann and Gerland that Heynckes led Bayern to the treble.

"I would not have returned to any other club in the world, but Bayern Munich is close to my heart," said Heynckes, vowing to transform the team back into a "successful" squad.

In an interview with Kicker magazine, Heynckes said he was "not making a comeback, it's a service for a friend".

"I'm doing it only because I owe a lot to Bayern."

The Bundesliga champions made no mention of former French international defender and Bayern stalwart Willy Sagnol, who had stepped in as interim coach after the shock departure of Italian Ancelotti.

Bayern are languishing in third place in the Bundesliga, five points behind leaders Borussia Dortmund.

Heynckes walked away in June 2013 after Bayern lifted the Bundesliga, Champions League and German Cup trophies in a glorious fortnight.

With Philipp Lahm as captain, they won the 2012/13 Bundesliga title by a massive 25 points, lifting the title on May 18 after a 4-3 win at Heynckes' old club Borussia Moenchengladbach.

A week later, Arjen Robben's second-half winner gave Bayern the Champions League title with a 2-1 win over Borussia Dortmund in an all-German final at Wembley.

It was the second time Heynckes won the trophy, after his 1997-98 triumph with Real Madrid, and his third Champions League final after Bayern lost at home to Chelsea on penalties in 2012.

"To win the Champions League for a second time or even to have been in three finals and won two of them is a bit special," Heynckes said after Bayern's Wembley triumph.

A 3-2 win over VfB Stuttgart meant Bayern left Berlin with the German Cup to complete the treble season on June 1.

"He's a great professional and a great person. The coach was the biggest factor in our success," said former Bayern midfielder Bastian Schweinsteiger at the time.

Despite his friendly grandfather-like appearance, Heynckes is a tough disciplinarian who once fined Schweinsteiger and fellow Germany star Toni Kroos for wearing the wrong colour socks to training.

As a fleet-footed winger, Heynckes won the 1974 World Cup with West Germany and the 1972 European championships.

He made 39 international appearances, scoring 19 goals for West Germany. He played for two clubs, Borussia Moenchengladbach, where he made 394 appearances and scored 243 goals, before a three-year spell at Hanover 96.

As a coach, he had stints at Gladbach, Bayern, Athletic Bilbao, Eintracht Frankfurt, Tenerife and Real, but was forced out of the Santiago Bernabeu after just one season despite winning the Champions League.

He stepped in as Bayern caretaker coach after Jurgen Klinsmann was sacked in April 2009 and took over in July 2011, after Louis van Gaal's departure, which culminated in the 2013 treble-winning season.

Comments
Topics mentioned in this article
Bayern München Football
Get the latest Cricket news, check out the India cricket schedule, Cricket live score . Like us on Facebook or follow us on Twitter for more sports updates. You can also download the NDTV Cricket app for Android or iOS.