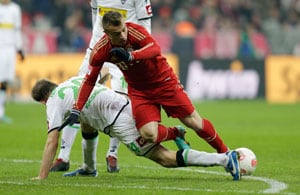 Bayern Munich winger Xherdan Shaqiri is expected to miss up to seven weeks after tearing his right hamstring while on international duty helping Switzerland book their 2014 World Cup place.

The 22-year-old scored in Switzerland's 2-1 win against Albania on Friday, but then came off with 53 minutes gone in Tirana as the Swiss stayed top of Group E.

A scan by Bayern's doctor Hans-Wilhelm Mueller-Wohlfahrt in Munich has revealed the extent of the injury with Shaqiri expected to be out until the start of December for the European champions.

"I'm disappointed, but will be trying to get fit again as quickly as possible," Shaqiri told the Bayern website with Champions League games against Czech side Viktoria Pilsen in the next three weeks.

"The diagnosis is bitter, I have already had a torn left hamstring, but I recovered from that quickly, so I am hoping it's the same this time."

Having mainly been used as back up to Arjen Robben on Bayern's right wing, Shaqiri admits he is annoyed by the timing of the injury having started in the 1-1 league draw at Bayer Leverkusen ten days ago.

"It's really stupid timing, I had a great week, I was used from the start at Leverkusen and was in good shape for the World Cup qualifier," said Shaqiri.

With Switzerland having qualified for Brazil as group winners, the winger said he is relishing another crack at the World Cup.

"The anticipation is huge, South Africa was a crazy experience for me as I was only 18," he said of the 2010 World Cup.

"In Brazil, I will hopefully get a lot more game time, we have a great team and want to make a bit of a splash for Switzerland."

Comments
Topics mentioned in this article
Football Bayern Munchen Xherdan Shaqiri
Get the latest updates on ICC T20 Worldcup 2022 and CWG 2022 check out the Schedule, Live Score and Medals Tally. Like us on Facebook or follow us on Twitter for more sports updates. You can also download the NDTV Cricket app for Android or iOS.