Bayern Munich extended their lead at the top of the Bundesliga with a thumping 4-0 win over VfB Stuttgart. 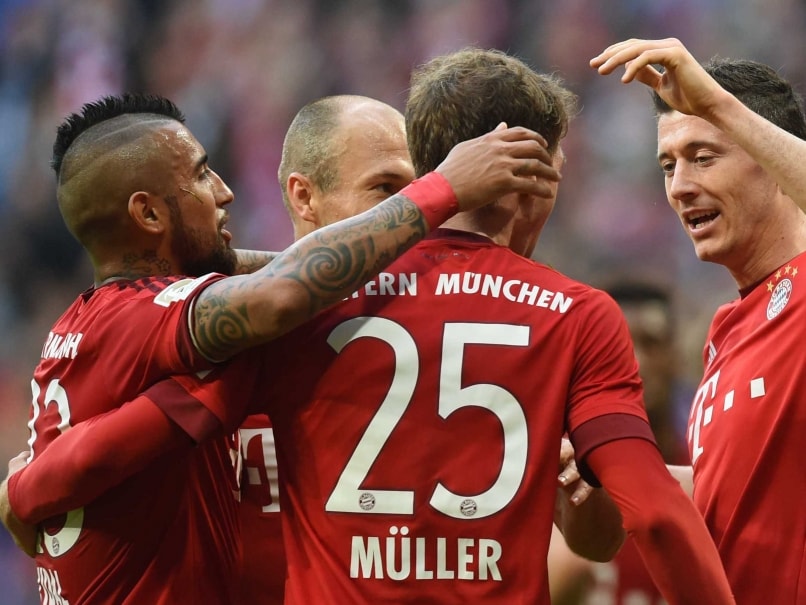 Robert Lewandowski claimed his 14th Bundesliga goal of the season on Saturday as Bayern Munich went eight points clear with a 4-0 win over VfB Stuttgart. (Catch All the Latest Football News)

Bayern's star-studded attack ran riot at the Allianz Arena with Arjen Robben, Douglas Costa and Thomas Mueller also getting on the scoresheet as defeat pushed Stuttgart back into the bottom three.

With second-placed Borussia Dortmund hosting Schalke on Sunday in the Ruhr derby, Bayern took the chance to extend their lead.

Pep Guardiola's Bayern picked up where they left off on Wednesday in the 5-1 rout of Arsenal in the Champions League.

"It's so difficult to play every three days and show this sort of mentality," said Guardiola, with Bayern targeting a repeat of their 2013 treble of Champions League, Bundesliga and German Cup.

"I hope they keep this aggression up until the winter break (in December) and then until the end of the season, because if we don't win the treble, it will have been a bad season."

The Bavarian giants have now claimed 34 points from 36 and are the only unbeaten team in Germany's top flight.

They took the lead just 11 minutes in after creating a five-on-one attacking opportunity.

Although Robben netted the goal, he had Arturo Vidal, Lewandowski and Mueller lining up to score behind him.

Costa then doubled the tally with a long-range strike on 18 minutes.

Poland's Lewandowski made it 3-0 on 37 minutes by volleying home Mueller's cross, which made him the league's top scorer, then the Germany forward grabbed the fourth with a header on 40 minutes.

Bayern have turned the Allianz Arena into a fortress by scoring 28 goals in their last six home games, conceding just three.

Third-placed Wolfsburg, last season's runners-up, are now 13 points adrift of Bayern after crashing to a 2-0 defeat at Mainz as Pablo de Blasis and Yunus Mali scored.

Wolfsburg were reduced to 10 men when Germany midfielder Julian Draxler was sent off inside the opening 15 minutes for kung-fu kicking Chile defender Gonzalo Jara while competing for the ball.

It capped a bad week for Wolves, who were usurped by Manchester United at the top of their Champions League group following their 2-0 defeat at Eindhoven.

Fellow Champions League side Bayer Leverkusen also suffered a second loss after being beaten 2-1 at home to neighbours Cologne in the Rhine derby.

Defender Dominic Maroh scored both of Cologne's goals while Leverkusen's Javier Hernandez scored for the sixth match running to give him 12 goals since joining from Manchester United.

Leverkusen were reduced to 10 men when defender Kyriakos Papadopoulos was shown a red card for bringing down Cologne striker Anthony Modeste when he was through on goal.

Hoffenheim remain second from bottom after their goalless draw with Eintracht Frankfurt while Hamburg drew 1-1 at Darmstadt as Pierre-Michel Lasogga's first-half penalty was cancelled out by Marcel Heller's equaliser for hosts Darmstadt.

Borussia Moenchengladbach had their six-match winning streak under caretaker coach Andre Schubert ended by a goalless draw at home to Ingolstadt.

On Friday, Ivory Coast striker Salomon Kalou grabbed a hat-trick to steer Hertha Berlin to a 3-1 win at Hanover and into the top four.

The 30-year-old former Chelsea star found the target in the 33rd and 60th minutes before completing his hat-trick with a penalty three minutes from time.

Kalou now has seven goals in the Bundesliga this season while Japan's Hiroshi Kiyotake scored Hanover's only goal with a 70th-minute spot-kick.

Comments
Topics mentioned in this article
Bayern Munchen Robert Lewandowski VfB Stuttgart Football
Get the latest updates on ICC T20 Worldcup 2022 and CWG 2022 check out the Schedule, Live Score and Medals Tally. Like us on Facebook or follow us on Twitter for more sports updates. You can also download the NDTV Cricket app for Android or iOS.