Former Bayern goalkeeper and Germany captain Oliver Kahn said Guardiola would be a good fit at the Bundesliga giants. 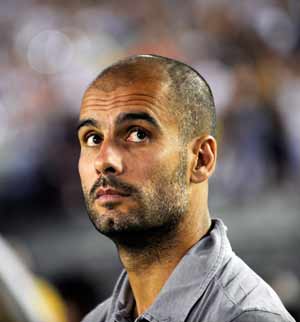 "It's all nonsense, we will first of all talk with Jupp Heynckes, he is our one and only contact," insisted Bayern's media director Markus Hoerwick.

Sky Italia on Monday reported the 41-year-old Spaniard, who won the Champions League title in 2009 and 2011 with Barcelona, has decided to coach Bayern next season.

With Heynckes' two-year contract to expire in June, rumours about Guardiola taking charge in Munich next season have been circulating for the best part of a year.

"Guardiola, FC Bayern, do not talk, impossible," was his brief reply before hanging up.

German magazine Kicker have reported Heynckes, 67, will decide his future this month, rather than in March as previously stated.

Guardiola, who is living in New York with his family since resigning as Barcelona coach last year, has only said: "It would be disrespectful if I were to say something concrete to a club who currently employs a coach."

Former Bayern goalkeeper and Germany captain Oliver Kahn said Guardiola would be a good fit at the Bundesliga giants.

"Of course it makes sense to take on someone like him," said the 43-year-old, who retired in 2008, told a news conference in Hamburg.

"Guardiola is very interesting, because of all the success he has had with Barcelona."

But Kahn did exercise some caution.

"At Barcelona, Guardiola was very successful and he absorbed a philosophy. But I wonder, would that work at another club?"

Comments
Topics mentioned in this article
Football Barcelona Borussia Dortmund Bayern Munchen Lionel Messi Shinji Okazaki
Get the latest updates on ICC T20 Worldcup 2022 and CWG 2022 check out the Schedule, Live Score and Medals Tally. Like us on Facebook or follow us on Twitter for more sports updates. You can also download the NDTV Cricket app for Android or iOS.