Bayern are on a roll, says four-goal Gomez

Germany striker Mario Gomez smashed four goals in Bayern Munich's 7-0 rout of FC Basel on Tuesday and insisted his team have big ambitions as they marched into the Champions League's last eight. 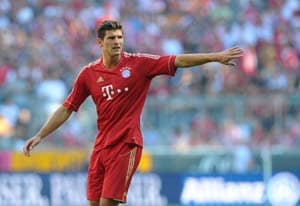 Germany striker Mario Gomez smashed four goals in Bayern Munich's 7-0 rout of FC Basel on Tuesday and insisted his team have big ambitions as they marched into the Champions League's last eight.

"We still have big goals and we've achieved nothing yet," said Gomez, who with ten goals to his credit is second only to Barcelona's Lionel Messi, who has 12, as the Champions League's top-scorer.

Gomez scored in a 23-minute spell, equalling the 2003 record set by AS Monaco striker Dado Prso for the quickest four-goal haul in the competition.

Having come to Germany holding a 1-0 lead from the first leg three weeks ago, Basel's dreams of reaching the Champions League's last eight for the first time were rudely awakened as they lost the tie 7-1 on aggregate.

This was the biggest win in a Champions League knockout match as records tumbled in Munich and Bayern bettered their 7-1 home win over Sporting Lisbon from the 2009 competition, also in the round of 16.

Gomez has now scored seven goals in his last two games having netted a hat-trick last Saturday when Bayern hammered Hoffenheim 7-1 at home.

"It was fun to play in that, to score seven goals in a Champions League match speaks for itself," said Robben.

"14 goals in our last two games after our defeat at Leverkusen speaks volumes for the way we have played.

"We have to stay focused, it would be good to get Barcelona or Real Madrid in the next round, but we'll take whoever comes."

President Uli Hoeness said his side are showing what they can do after poor recent form sees them second in the German league.

"Now we have shown twice what this team is made of," he said.

"It was fun to watch.

"Perhaps we need the pressure when our backs are against the wall.

"In the games when things haven't gone so well, we didn't run as much as in the last two matches."

Bayern's performance was as clinical as it was brutal and after 90 minutes the Basel defence was cut to ribbons, especially down their left flank where France winger Franck Ribery provided three crosses for Gomez to score.

"We wanted to show from the beginning what we could do," said captain Philipp Lahm as his side led 3-0 at the interval.

"After the break we showed, just as we did on Saturday, that we can take a team apart."

It was also Basel's worst ever away European defeat, breaking the 5-0 record set in 1963 at Celtic and equalled in 2008 at Shakhtar Donetsk in Ukraine.

"You have to see this is a game to try to take something positive away from," said Basel coach Heiko Vogel, whose team knocked out Manchester United in the group stages.

"Maybe we can learn more from this than the wins we've enjoyed so far in the competition.

"Of course you have to talk about the quality Bayern have, but we need to learn our lessons."