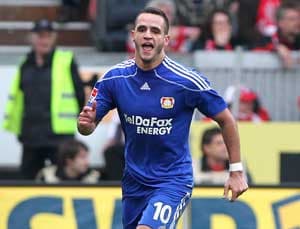 With the game heading towards a goalless draw, Augusto robbed Mainz's Danish defender Bo Svensson of possession on the edge of the penalty area and drilled home his shot on 82 minutes to poach three points for his team.

After Dortmund lost 1-0 at Hoffenheim on Saturday, Leverkusen made up some ground on the leaders, while defending champions Bayern Munich are up to fourth, 16 points behind Dortmund, after they hammered Hamburg.

Ex-Germany captain Michael Ballack played the full 90 minutes for Leverkusen, but failed to make his mark and the 34-year-old looked short of fitness as he tries to win back his place in the national side after injury.

On Sunday night, Stuttgart hauled themselves out of the relegation zone with a 2-1 win at St Pauli as substitute Sven Schipplock - making his Bundesliga debut - scored the 88th winner which left their opponents in the bottom three.

Schipplock, promoted from Stuttgart's reserves, had only been on the pitch five minutes when he popped up with the winner which moved his side up to 13th as just six points seperate the league's bottom six sides.

On Saturday, Dutch winger Arjen Robben netted a hat-trick as Bayern Munich smashed their losing streak with a 6-0 rout of Hamburg.

After Bayern boss Louis van Gaal was told last Monday that his contract will be terminated at the end of the season - a year earlier than planned - Bayern secured their biggest win of the season following three straight defeats.

Germany midfielder Thomas Mueller also netted and French star Franck Ribery scored one and made one as Bayern inflicted a defeat that later cost Hamburg coach Armin Veh his job on Sunday morning after an emergency meeting.

On Saturday night, Werder Bremen pulled further away from the relegation zone after a 1-1 draw with bottom side Borussia Moenchengladbach, for whom Brazil defender Dante scored a 92nd-minute equaliser.

The league's top side, Dortmund, were beaten for only the third time this season through a second-half goal from Hoffenheim striker Vedad Ibisevic.

Schalke, who booked their place in the Champions League quarter-finals in mid-week, beat Eintracht Frankfurt 2-1 to ease the pressure on coach Felix Magath after last week's reports he is set to be fired.

The Royal Blues' bosses have neither confirmed nor denied the reports and there were plenty of banners in support of Magath at the Veltins Arena.

Greek striker Angelos Charisteas scored the winner in the 84th minute - 52 seconds after coming off the bench.

Mid-table Nuremberg picked up their sixth win in seven games with a 2-1 victory at Wolfburg, which dropped Wolves into the relegation zone, while Kaiserslautern won 2-1 at home to Freiburg to escape the bottom three.

Cologne picked up their sixth straight league win at home with a 4-0 victory over Hanover on Friday night.

Comments
Topics mentioned in this article
Football Shinji Okazaki Borussia Dortmund Bayern Munchen Bayer Leverkusen
Get the latest updates on ICC T20 Worldcup 2022 and CWG 2022 check out the Schedule, Live Score and Medals Tally. Like us on Facebook or follow us on Twitter for more sports updates. You can also download the NDTV Cricket app for Android or iOS.