Barry to captain England against Ghana 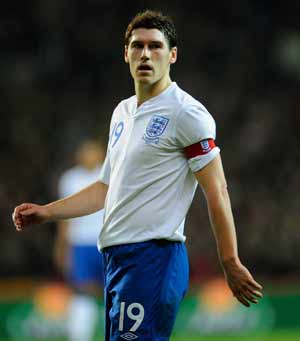 Barry has been handed the skipper's armband because England coach Fabio Capello has allowed his recently reappointed captain John Terry to miss the match as a favour to Chelsea boss Carlo Ancelotti.

Terry, Frank Lampard, Ashley Cole, Wayne Rooney and Michael Dawson have been sent home by Capello to rest ahead of a busy period for their clubs, who are all competing in the Champions League, and that left Barry as the most senior players remaining in the squad.

Barry wasn't even in Capello's 18-man matchday squad for Saturday's 2-0 Euro 2012 qualifying win over Wales in Cardiff, but the absence of so many other experienced players made him the best captaincy option for the Italian.

"Barry will be the captain," Capello said at Wembley on Monday. "He played all the games with me apart from the last one.

"He is a good player and a good captain. Also he is the player with the most England caps."

Capello's decision to give Terry the night off comes just a week after he was criticised for the way he handled his move to replace previous captain Rio Ferdinand with the Chelsea defender.

The England boss has now used seven different captain's during his three-year reign, although Barry has some previous experience of leading England.

He took the armband for the second half of a friendly against Trinidad and Tobago in June 2008 and also had brief spells as skipper during the latter stages of friendly wins against Egypt and Denmark.

The 30-year-old also led Aston Villa for three years before his move to Eastlands and Barry is confident he won't be affected by the extra pressure of captaining his country.

"Obviously it's going to be a massive moment in my carrer. I'm really looking forward to doing the job," Barry said.

"I will be the same player I always am. You don't put the armband on and change.

"I've got experience of three years captaining Aston Villa. There is some extra responsibility but I won't change the way I play."

With Capello set to make at least seven changes to the team that beat Wales, Barry is aware that he will have to keep an eye on the newer players in the line-up to ensure they don't lose sight of their roles.

"There are a few chances for people with the players going home," he said.

"There will be one or two champing at the bit to stake their claim and at some points there might be some help I can pass across."

Barry understandably felt disappointed not be make Capello's squad on Saturday and taking over the captaincy has gone some way to easing his frustration.

"I was disappointed not to be involved on Saturday but in football things can change quickly," he said.

"I didn't play against Wales then two days later I have been asked to captain my country. That's how much can happen in a short space of time."

Ghana's visit to Wembley has drawn a sell-out crowd of over 80,000 and Capello's decision to rest so many key players is bound to disappoint some fans.

But Barry backed Capello's move because he believes it is more important to preserve players' fitness for the crucial final weeks of the season.

"I can certainly see the reasons for this decision. It's a tough part of the season now," he said.

"There are a lot of games in a short period of time and they are big games.

"I know the fans have bought their ticket to see certain individuals perform for England, but at the same time the rest of the players were in the squad from the start. They weren't just called up at the last minute."

Comments
Topics mentioned in this article
Football Gareth Barry Manchester City Ghana Barcelona
Get the latest updates on ICC T20 Worldcup 2022 and CWG 2022 check out the Schedule, Live Score and Medals Tally. Like us on Facebook or follow us on Twitter for more sports updates. You can also download the NDTV Cricket app for Android or iOS.