Spanish champions Barcelona have proposed a total ban on smoking at its Camp Nou stadium, club officials said on Monday. 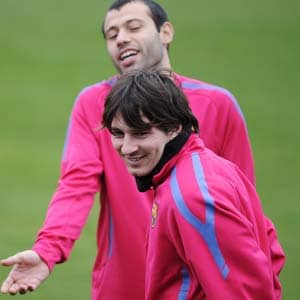 The club will ask its members to vote on the proposal for "a smoke-free Camp Nou" at its next general assembly, said Jordi Mones, one of the club's directors.

"This is consistent with Barca's values," he told a news conference.

If Barcelona members approve the proposal, the smoking ban will come into effect next season, Barcelona president Sandro Rosell added.

Under a new anti-tobacco law which came into effect across Spain on January 2, smoking is already forbidden in indoor passageways in the Camp Nou stadium, which can seat 99,354 people.

The new law, one of the strictest in Europe, bans smoking in all enclosed public spaces, including bars, restaurants and night clubs, and makes it illegal to smoke in children's parks or anywhere on school or hospital grounds.

Barcelona said the initiative is in line with similar policies across Europe.

Dutch club Ajax and Germany's Bayer Leverkusen have banned smoking at their grounds as have all stadiums in Britain, the club said on its website.

Comments
Topics mentioned in this article
Football Levski Sofia Spain AC Milan Barcelona Samuel Eto'o
Get the latest updates on ICC T20 Worldcup 2022 and CWG 2022 check out the Schedule, Live Score and Medals Tally. Like us on Facebook or follow us on Twitter for more sports updates. You can also download the NDTV Cricket app for Android or iOS.