Barcelona look to bounce back in Champions League

Humbled by Celtic in the latest shock result in the Champions League, Barcelona travel to Russia this week as the competition favorites attempt for the second time to seal a place in the knockout stage. 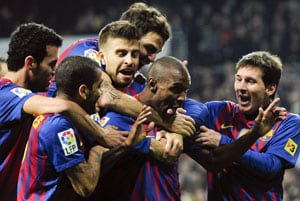 Humbled by Celtic in the latest shock result in the Champions League, Barcelona travel to Russia this week as the competition favorites attempt for the second time to seal a place in the knockout stage.

The Champions League has thrown up a string of unpredictable scorelines this season and none bigger than Barca's 2-1 loss in Glasgow two weeks ago, preventing the Spanish giants joining FC Porto, Malaga and Manchester United in the last 16 with two games to spare.

Lionel Messi and his team still need one more victory to advance in Group G but achieving that at Spartak Moscow on Tuesday is far from guaranteed, given that Barcelona has only won once in six trips to Russia.

"We must not drop our guard or relax," Barcelona playmaker Andres Iniesta. "Up to this point, our start to the season has been sustained and sensational. But we must continue as we've begun."

While Barcelona is still a big favorite to progress, the same can't be said of a number of Europe's big guns.

Manchester City has been on the cusp of elimination for a month now and the fate of the English champions, who are bottom of Group D on just two points from four games, will be sealed if they fail to beat Real Madrid at home Wednesday in the most high-profile clash of the fifth round of group games.

A win for Madrid would likely take it through, although Jose Mourinho's side is also stumbling after picking up just one point from its double-header with silky German side Borussia Dortmund.

"We will play with practically our season on the line," Madrid defender Sergio Ramos said. "As a football player, those are the kind of games you live for."

Dortmund is the group leader and needs only a point at Ajax to advance.

Chelsea is engaged in a tough three-way fight for the two qualification spots in Group E, and a loss in Juventus on Tuesday will leave the holders' destiny out of their hands. Only one point separates Chelsea, Juventus and group leader Shakhtar Donetsk, which could qualify with a win at FC Nordsjaelland.

AC Milan needs a win in Anderlecht on Wednesday if the struggling Italian side isn't to face the serious prospect of elimination from Group C, while the winner of Tuesday's match between Valencia and last season's runner-up Bayern Munich will qualify in Group F.

Paris Saint-Germain requires just a point at Dynamo Kiev to join FC Porto in the next round from Group A, while Schalke and Arsenal will qualify from Group B if they beat Olympiakos and Montpellier, respectively.

Messi, the prolific Argentina forward, has tried to make Barcelona forget about its disappointment in Scotland by maintaining his remarkable run of scoring form.

His double in the 3-1 win at Real Zaragoza on Saturday took his 2012 tally to 78 in 2012, moving within seven of former Germany striker Gerd Mueller's all-time record of goals in a calendar year, set in 1972. Last week, Messi scored another double to move past Pele into second place (75 goals in 1958).

However, coach Tito Vilanova has made a point of saying his squad's success is more down to teamwork than the individual brilliance of its star player.

"We need all of our players, because just one man can't win you the match," Vilanova said.

Barca has already spoken of Messi's hunger to beat Raul Gonzalez's tally of 71 goals as the all-time highest scorer in the Champions League. Currently, Messi is third with 54, behind Ruud van Nistelrooy (56).

Vilanova welcomed back the central-defensive pairing of Gerard Pique and Carles Puyol at the weekend, which should shore up a back line that looked exposed against Celtic.

A stoppage-time winner in a 3-2 victory over Shakhtar kept Chelsea in contention last time out, but there remains the genuine possibility that the English team could become he first reigning champion to fail to make the knockout stage.

The Blues are in their first rut of the campaign, having won just two points from their last four Premier League games.

"We've been in this position before. For some reason, November for our club is a bad month and it seems to again be the case this year," Chelsea manager Roberto di Matteo said. "We have to try and address that."

Comments
Topics mentioned in this article
Football Levski Sofia Samuel Eto'o AC Milan Lionel Messi Spartak Moscow Barcelona
Get the latest Cricket news, check out the India cricket schedule, Cricket live score . Like us on Facebook or follow us on Twitter for more sports updates. You can also download the NDTV Cricket app for Android or iOS.