Barcelona are now a distant seventh in the La Liga table, 12 points off leaders Atletico Madrid, who beat Real Valladolid 2-0. 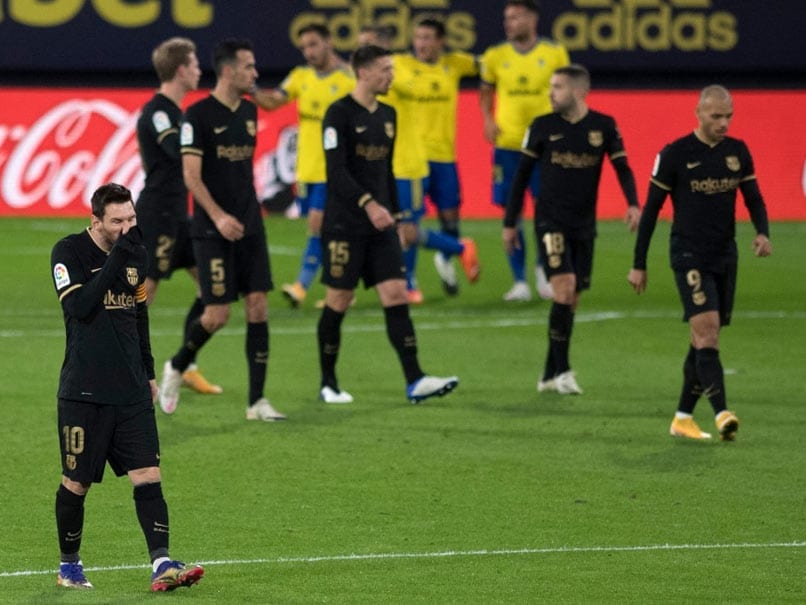 Lionel Messi's Barcelona suffered a fourth Liga defeat of the season as they went down 2-1 to Cadiz.© AFP

Lionel Messi's Barcelona suffered a fourth La Liga defeat of the season as they went down 2-1 to Cadiz on Saturday, while Real Madrid eased the pressure on Zinedine Zidane with their first league win since October. Barca are now a distant seventh, 12 points off leaders Atletico Madrid, who beat Real Valladolid 2-0. "It's a gigantic step backwards for our chances to fight for La Liga, you have to see it like that," the Catalans' coach Ronald Koeman said. "A points difference of 12 points with a team as strong as Atletico is enormous," he added.

Koeman made three changes from the midweek Champions League win at Ferencvaros with goalkeeper Marc-Andre ter Stegen coming in for Neto.

But Ter Stegen made a first costly error in Andalusia after eight minutes as Alvaro Gimenez claimed his second goal in as many games.

The Barca defence failed to clear a corner which fell to Ter Stegen, but his weak parry onto his own line was tapped in by Gimenez.

Koeman's men were all-square after 56 minutes as Jordi Alba's low cross was deflected into his own goal by defender Pedro Alcala.

Clement Lenglet made a hash of Alba's throw in before Ter Stegen failed to clear under pressure from Negredo and the former Manchester City striker claimed his third goal league goal of the campaign.

Under-pressure Zidane said Madrid's scrappy 1-0 victory in Seville was significant after a testing run of results.

Sevilla goalkeeper Bono guided Vinicius Junior's effort into his own net in the second half, allowing Zidane's side to take the three points and move up to third in the table, six points behind Atletico.

Following two defeats in the past three games, including a 2-0 defeat to Shakhtar Donetsk in midweek that leaves Real's Champions League qualification hopes in the balance, Spanish press reports have linked former Tottenham boss Mauricio Pochettino and ex-Madrid forward Raul to Zidane's job.

Zidane said he was satisfied with the points after a "difficult" time.

"These are three very important points for us. It's a well-deserved win, against a very good opponent, who can put you in trouble at any time. We got through this," he said.

"It has been a bit difficult lately, today we have to enjoy it, be happy, but nothing more."

Atletico, now unbeaten in 26 games in La Liga, moved to the top of the table after France international Thomas Lemar and Spain midfielder Marcos Llorente scored for Diego Simeone's men against Valladolid.

Atletico are among five clubs to remain without a domestic defeat in Europe's main five leagues since the start of the season.

Real Sociedad, who have lost just once in the league this term, could regain the lead if they beat Deportivo Alaves on Sunday.