Barcelona back to winning ways in Copa del Rey opener

Pedro Rodriguez scored either side of Cesc Fabregas' second-half volley, and substitute Jean Dongou marked his debut with a late goal as Barcelona snapped out of their first slump of the season. 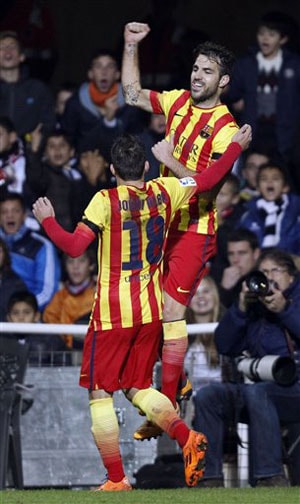 Barcelona came from behind for an easy 4-1 victory over Cartagena in the Copa del Rey on Friday to end a two-game losing streak.

Carlos de Lerma struck after just six minutes to put the hosts ahead against the Spanish champions, who left Neymar on the bench.

Pedro Rodriguez scored either side of Cesc Fabregas' second-half volley, and substitute Jean Dongou marked his debut with a late goal as Barcelona snapped out of their first slump of the season.

"We were obliged to win considering who we are and where we come from," coach Gerardo Martino said.

Six matches opened the round of 32, with Juan Carlos Garrido beginning his Real Betis coaching career with a win as the struggling Spanish league side beat 10-man Lleida 2-1.

None of the lower-tier clubs emerged victorious on Friday as Real Betis and Sevilla coming away from their first legs with away wins.

De Lerma latched on to a bouncing ball inside the area to fire Cartagena ahead, and the hosts should have had a second 10 minutes later only Fernando Rodriguez shot wide.

"They played a very intense game, they didn't stop running and showed a great attitude for the first 15 to 20 minutes," Martino said. "But after that when we controlled possession we took the legs out from under Cartegena."

But Barcelona - which had Jordi Alba return for the first time since September - continued to pressure with its speed and combinations, with Alexis Sanchez and Pedro guilty of glaring misses before Fabregas sprung Pedro with a through ball to score from in the 36th.

Fabregas volleyed Adriano's cross into the top corner to put Barcelona ahead just before the break.

Sanchez re-directed Pedro's cross over an empty goal just before the Chile striker put Pedro through to score in the 75th with a slick dummy around goalkeeper Jesus Limones.

Dongou came on for Alexis and the Cameroon teenager latched on to Pedro's shot as it came off the post in the 90th for his first goal.

Lleida goalkeeper Pau Torres was red-carded in the fourth minute and his replacement, Fran Perales, saved the ensuing penalty from Jorge Molina.

But Joan Verdu scored the next penalty in the 27th to put Betis ahead, and Molina made up for his earlier miss in the 42nd after a gaffe by Perales.

Despite Betis scoring two away goals, Lleida pulled a goal back through Pere Milla in the 57th to stay in the second leg.

Garrido replaced Pepe Mel on Monday with Betis bottom of the first division.

Elsewhere, Algeciras rallied to draw 1-1 against Real Sociedad, 10-man Sevilla won 1-0 at Racing Santander, and Elche has the edge after drawing 2-2 at Villarreal in a matchup of topflight clubs. Rayo Vallecano and Valladolid drew 0-0 in the other topflight matchup.

Comments
Topics mentioned in this article
Football Pedro Lionel Messi David Villa Cesc Fabregas Barcelona Real Madrid
Get the latest Cricket news, check out the India cricket schedule, Cricket live score . Like us on Facebook or follow us on Twitter for more sports updates. You can also download the NDTV Cricket app for Android or iOS.