Ballack to miss out again on Germany call-up

Ex-Germany captain Michael Ballack will again miss out on selection for the Euro 2012 qualifier against Kazakhstan and the friendly with Australia when coach Joachim Loew names his squad on Friday. 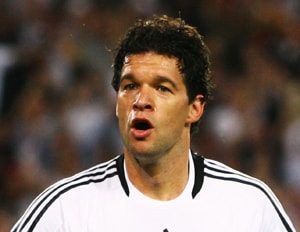 Ex-Germany captain Michael Ballack will again miss out on selection for the Euro 2012 qualifier against Kazakhstan and the friendly with Australia when coach Joachim Loew names his squad on Friday.

Ballack, 34, is working his way back to full fitness after back-to-back injuries and has yet to make himself part of coach Jupp Heynckes' first-choice line-up at Bundesliga side Bayer Leverkusen.

Despite 98 caps to his name and 42 goals for his country, Ballack is currently surplus to requirements in the national side and Loew has said the ex-Chelsea star will not be included when the squad is named on Friday.

Germany play Kazakhstan in Kaiserslautern on May 26 in a Euro 2012 qualifer, followed by a friendly with Australia in Moenchengladbach three days later.

"He must reach a certain level of performance in Leverkusen, but things are looking better for him there," explained Loew to German magazine Kicker.

In Ballack's absence, Real Madrid's Sami Khedira and Bayern Munich's Bastian Schweinsteiger have forged a partnership at the centre of Germany's midfield on which Loew has heaped praise.

Ballack has played just nine Bundesliga games this season after fracturing his leg in September on only his third game back after damaging ankle ligaments last May, which kept him out of the World Cup in South Africa.

In his absence, Bayern's Philipp Lahm will captain the side again, with Germany five points clear at the top of their Euro 2012 qualifying group.

Having signed a contract extension that will keep him in charge until after the 2014 World Cup in Brazil, Loew, who took over as head coach in 2006, said his goal remains to lift a major title.

"That is always the goal. We have developed a good, young side with great prospects," he said.

"There is plenty of motivation to take things forward and win a title. This team is on a very good path."

Promising young striker Andre Schuerrle, who has scored 12 goals in 25 appearances for Mainz this season, is likely to be called up and add to the first cap he won in the goalless friendly draw with Sweden last November.

"There is a good possibility, that he will be in the squad," said Loew.

"In the last few weeks he has produced some good performances and is dangerous in front of goal."

Comments
Topics mentioned in this article
Football Germany Tennis
Get the latest updates on ICC T20 Worldcup 2022 and CWG 2022 check out the Schedule, Live Score and Medals Tally. Like us on Facebook or follow us on Twitter for more sports updates. You can also download the NDTV Cricket app for Android or iOS.