Australia, stung by a goal against the run of play, fought back gallantly in the closing minutes to clinch a 2-1 win over Iraq in a Group B Asia final qualifier here on Tuesday. 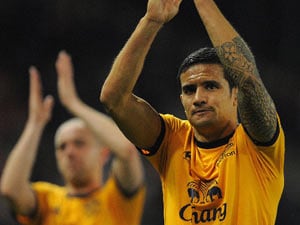 Australia, stung by a goal against the run of play, fought back gallantly in the closing minutes to clinch a 2-1 win over Iraq in a Group B Asia final qualifier here on Tuesday.

The Socceroos, who were stunned 2-1 by Jordan recently, desperately needed a win to move up the table.

Tied at two points each with Iraq coming into Tuesday's tie they now have five points to go level with Oman, who defeated Jordan earlier.

Iraq are now at the bottom of the table with two losses and two draws. Japan, beaten 4-0 in a friendly against Brazil in Poland, lead the group with 10 points from their four matches.

At the Grand Hamad stadium, Australia and Iraq shared possession in the goalless first half, but Australia had more chances of scoring. One of their best chances came in the 27th minute when Tim Cahill unleashed a superb left-footer but Iraqi keeper Abbas brought about an acrobatic save to deny Australia.

And they completely dominated the second half, but it was Iraq who scored first against the run of play.

Australia had a couple of good chances early in the second half, none better than the attempt by Mile Jedinak, who got past the Iraqi defence, but his nudge past the rushing keeper went just inches away from the sidebar.

After another unsuccessful Aussie raid terminated, Younis Khalef made a perfect long cross to winger Mustafa Karim on the left, who headed it down perfectly for the rushing Alaa Abdul-Zehra to slip it past Mark Schwarzer in the 72nd minute.

But that just galvanized Australia as they increased their attacks and Cahill, their talismanic forward, scored the equalizer eight minutes later when he headed home from a corner kick.

And the comeback was complete for Holger Osieck's men in the 84th minute when substitute Archie Thompson, who had come in for Alex Brosque in the 75th minute, leapt over the Iraqi defence and headed home a Tommy Oar cross.

Comments
Topics mentioned in this article
Everton Mark Schwarzer Tim Cahill Sunderland Football Australia Cricket Team
Get the latest updates on IPL 2020, check out the IPL Schedule for 2020 and Indian Premier League (IPL) Cricket live score . Like us on Facebook or follow us on Twitter for more sports updates. You can also download the NDTV Cricket app for Android or iOS.