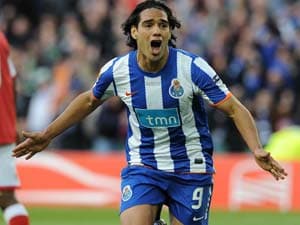 The Portuguese club said in a statement to the Lisbon stock exchange that the price tag could rise to 47 million ($67 million) depending on variable factors it did not specify.

Atletico said on its website that Falcao had agreed to a five-year contract and was scheduled to arrive in the Spanish capital to undergo the standard medical test later Friday.

Falcao - nicknamed "El Tigre" (The Tiger) - was a key player for Porto last season, scoring 34 goals to help it win four trophies, including the Portuguese title, in a 30-game unbeaten league run.

Falcao will step in to fill the role vacated by Argentina striker Sergio Aguero, who joined Manchester City in a 38 million pound ($62 million) deal last month.

The deal also comes with Atletico reportedly negotiating with Inter Milan over the possible transfer of Uruguay striker Diego Forlan, who was left out of the Spanish club's squad for Thursday's 2-0 Europa League victory over Guimaraes.

The 25-year-old Falcao scored the only goal in the Europa League final in Dublin to set a record of 17 goals in Europe's second-tier competition. Chelsea were also reportedly interested in Falcao since coach Andres Villas-Boas coached the Colombian last season at Porto.

"(Porto) was my first step into Europe and it was impossible to have gone better," Falcao wrote on his official website. "At a time like this I can just feel extremely grateful to all for this unforgettable experience."

Porto said it was also selling Portugal midfielder Ruben Micael to Atletico for 5 million ($7 million). Atletico said Micael agreed to a four-year deal and was set to be loaned out to Spanish club Zaragoza for the season.

Comments
Topics mentioned in this article
Football Liverpool Sporting Braga Atletico Madrid Sevilla Benfica FC Porto Radamel Falcao
Get the latest updates on IPL 2021, check out the IPL 2021 Schedule and Indian Premier League Live Score . Like us on Facebook or follow us on Twitter for more sports updates. You can also download the NDTV Cricket app for Android or iOS.