Valencia boosted their Champions League hopes with a clinical 2-1 victory over Athletic Bilbao who dominated the encounter on Sunday. 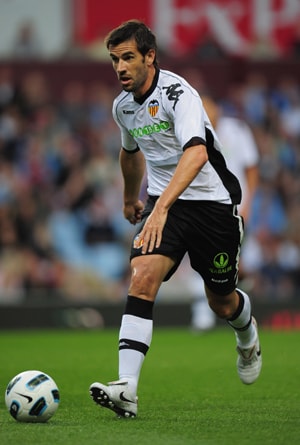 Valencia boosted their Champions League hopes with a clinical 2-1 victory over Athletic Bilbao who dominated the encounter on Sunday.

The visitors anticipated a rough ride at San Mames which has been a fortress for Athletic this season and that's how it turned out with Fernando Llorente giving them the lead.

Athletic looked comfortably in control and Pablo Hernandez and David Lopez had further chances before Llorente hit the post.

However, against the run of play a fine move down the right-wing saw Joaquin Sanchez cross for Juan Mata to equalise and then while Athletic were still reeling, Tino Costa struck a powerful shot which the keeper Gorka Iraizoz couldn't hold and substitute Jonas Goncalves scored.

An injury time strike from substitute Nilmar Honorato earned Villarreal a 2-2 draw against Racing Santander and avoided their third defeat in four games.

Having clung onto the shoulders of the top two for most of the season, February has proved to be a tough month for Villarreal with the added effort of playing in the Europa League having taken its effect.

Ariel Gerardo put Racing ahead after just three minutes and while Villarreal pushed forward, they lacked a cutting edge. The home side had the better chances before Marco Ruben equalised mid-way through the second half.

Just two minutes later though substitute Giovani Dos Santos appeared to have given Racing all three points until Nilmar pounced in the dying moments.

"I am happy with the way the game went and proud of the effort from the players. It was a very difficult match which was end to end," said Villarreal coach Juan Carlos Garrido.

"We attacked more but at the same time we were not precise with some of our passing and left ourselves open at the back."

Levante came out 2-1 winners in their relegation battle with Osasuna and have opened up a three-point cushion over the bottom three.

Osasuna have failed to win away in over a year but they did go ahead from their first real opening with Walter Pandiani heading home a Masoud Soleimani cross.

They were in front for just three minutes though as Sergio Ballesteros slotted in a loose ball in the area and then after the restart a poor back pass was picked up by Felipe Caicedo and he made most no mistake in front of goal.

Hercules wasted a hatful of chances as they could only draw 0-0 with Getafe.

It was not to be Hercules day as David Trezeguet and Javier Portillo missed good chances while Cristian Hidalgo hit the crossbar.

On Saturday, Barcelona moved seven points clear at the top after they beat Mallorca 3-0 while Real Madrid only drew 0-0 against a well-organised Deportivo la Coruña side.

Comments
Topics mentioned in this article
Football Jonas Real Madrid Levante Valencia Osasuna Athletic Bilbao Barcelona Fernando Llorente Rafael Nadal Villarreal
Get the latest updates on ICC Women's Cricket World Cup 2022 and IPL 2022, check out the Schedule , Live Score and IPL Points Table. Like us on Facebook or follow us on Twitter for more sports updates. You can also download the NDTV Cricket app for Android or iOS.