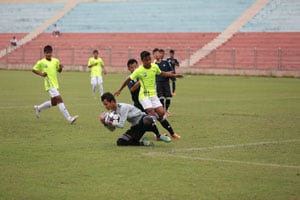 Betkuchi High School of Assam scripted history at the Ambedkar Stadium on Friday with an a stunning 1-0 win over defending champions Greenwood School, Nagaland to enter the U-14 final of the Subroto Cup football tournament for the first time.

It was a well earned victory for the boys from Assam who had to defend fiercely for much of the game. The team from Nagaland held the upper hand for most of the first half but Assam's Birkwdao Daimary scored directly from a corner just before half-time.

"It was a lucky goal. We now have to win the final," said a confident Daimary after the match.

Meghalaya were the superior team for much of the match, forcing NCC onto the backfoot, and can consider themselves unlucky to be knocked out of the tournament.

In the U-17 category matches which started on Friday, former champions NCC (West Bengal & Sikkim) rode on an Anil Kujur strike to beat North Eastern English School, Manipur by a single goal.