According to an English newspaper, 33-year-old England defender Ashley Cole, who was ignored for the upcoming World Cup, threw a glass of champagne over British televsion presenter Donatella Panayiotou at a Hollywood Party in Los Angeles. 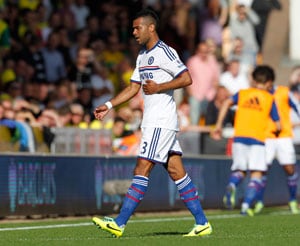 If Cole is charged and found guilty he could face a prison sentence, community service or a fine.

Former England full-back Ashley Cole is being investigated by Los Angeles police for assault after a glass of champagne was thrown at a television presenter, police and reports said Sunday.

"A battery complaint was filed on May 31. It is been investigated by a Hollywood division," a Los Angeles Police Department source told AFP on condition of anonymity.

The incident was reported on May 31, although the source could not confirm whether or not that was the day it happened.

English newspaper the Sunday Mirror reported that Cole, 33, who was released by Chelsea at the end of last season, threw a glass of champagne over British television presenter Donatella Panayiotou at a Hollywood party.

It said Cole was in Los Angeles with fellow former England international Shaun Wright-Phillips and other friends, after being overlooked by England manager Roy Hodgson for the World Cup squad that arrived in Brazil on Sunday.

Cole, England's most capped full-back, allegedly told Panayioutou: "You know what this is for."

According to the Sunday Mirror, Panayioutou, 29, had a neck piercing ripped out in the confrontation.

She told them: "There was an incident and it is now in the hands of the police authorities following a formal complaint of assault against Ashley Cole."

If Cole is charged and found guilty he could face a prison sentence, community service or a fine.

Having left Chelsea, Cole is believed to be considering the possibility of joining an MLS team.

But if he is convicted, he could struggle to get a US work visa.