Argentine Feet and 21-Inch Holes Transform Play on the Links

Footgolf, which is played with a regulation soccer ball on a shortened golf course, was invented about six years ago in the Netherlands. It came to Argentina shortly after, in 2010, and has flourished: Organized leagues have been formed across the country and the best players, led by Otero, often compete abroad. 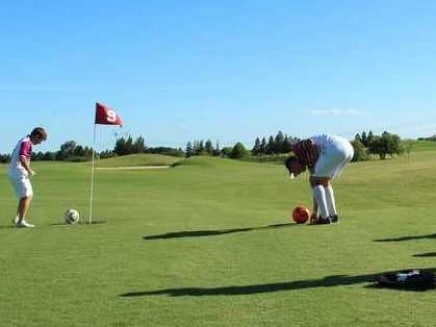 Footgolf has emerged as an alternative to golf in Argentina

With dusk falling, Nico Garcia squatted down to read the perilous 20-foot par putt. Needing only a bogey to win Argentina's national championship, he sent the ball snaking downhill across the green, where it stopped just short of the hole. He tapped in for victory - not with a putter, but with the instep of his soccer cleat.

Garcia's game is not golf but footgolf, a hybrid that borrows rules and courses from its more established relation, only with a larger ball, a 21-inch hole and feet instead of clubs. As footgolf emerges as one of the modern alternatives to golf, the subject of fretting over a precipitous drop in participation, Argentina has established itself as the dominant force in the game.

"There's no doubt that we're a level above the other countries," said Christian Otero, 36, Argentina's top-ranked player.

Footgolf, which is played with a regulation soccer ball on a shortened golf course, was invented about six years ago in the Netherlands. It came to Argentina shortly after, in 2010, and has flourished: Organized leagues have been formed across the country and the best players, led by Otero, often compete abroad.

The regular competition has given Argentines an unrivaled springboard to develop their game swiftly, said Javier de Ancizar, the 38-year-old president of Argentina's footgolf association. But Argentina's strength on the world stage - footgolf's international governing body has 27 member countries - is also attributed to innate talent, or what de Ancizar called the "raw material" of footgolf.

"When you're born, a soccer ball is the first present you receive," said Marcos Cortes, 29, a steel salesman who is ranked 21st nationally. "Striking the ball is in our physiology; it's automatic."

It was an Argentine living in Palm Springs, California, who introduced the game in the United States and later helped to found the American FootGolf League. Footgolf is now growing across the United States, where golf courses seeking revenue are embracing it.

Argentina will host the second World Cup next year, after Hungary - the other seedbed of footgolf talent - held the inaugural competition in 2012. (Players always compete individually, but the World Cup may have a team format and prize, too.)

"The Argentine league is at the vanguard," said Marcelo Landau, 56, an Argentine-born American who promotes and organizes footgolf in Florida and represented the United States at the World Cup in Hungary. "Other countries follow Argentina's steps."

Traditional golf in Argentina remains a hobby of the elite, and a vast majority of footgolf players here are defectors from soccer.

"Soccer is my wife," Matias Perrone said, standing on the 10th tee at the national championship. "And footgolf is my mistress; she tempts me."

Perrone, 32, an advertising agent who alongside Otero is one of the world's best players, is also a striker for Santa Marta, a neighborhood soccer team in Buenos Aires. In 20 years of playing for Santa Marta, he said, the only events that led him to miss matches were violent illness and a qualifier for the footgolf World Cup.

He has been at the forefront of the sport's rise, securing sponsorship from apparel companies and his municipal government long before his rivals. Last year, he competed in what were billed as the sport's first pro-am events in Hamburg, New Jersey, and Oxnard, California.

Perrone and Otero defeated international fields to win both tournaments, and their countrymen packed the leaderboards.

But while Argentine players have established themselves as the world's best, beginners here sometimes struggle to adapt to the frustrations and etiquette of the sport.

"In soccer, there is a lot of trickery," said Julio Colacci, 40, a businessman who plays on a circuit based in Mar del Plata, a coastal town, and likes to compete wearing a fuchsia beret. "Argentines are hustlers, and we find it hard to respect the rules."

Equipment is mix and match. Players wear polo shirts and use soccer cleats designed for artificial turf. Off the tee, some use low-profile training cones as tees. Every player, however, opts for the same model of soccer ball - the 2011 Adidas Speedcell, which is prized because it runs fast on the longer grass of the fairways.

Otero has amassed an envious stock of 15 Speedcells, but since the model is no longer manufactured, players hunt for them like hidden treasure. In his quest to find one last year, Cortes stopped at every town during the drive from his hometown, Carcarana, in Santa Fe province, to a tournament in Uruguay. He eventually found one at a sports store in Concordia, a border city.

"It's a four-hour drive, but it took me eight or nine," Cortes said.

Searching online, he also located a prized Speedcell at a store in California. But, agonizingly, when his sister took a trip to the West Coast, she neglected to gauge the importance of his request and did not bother to collect it.

While they prefer the Speedcell now, Otero and Perrone - constantly pushing to evolve the sport - have pioneered a prototype for a ball that they think is more accurate.

"It lacks precision," Otero, an agent for prominent soccer players, said before drilling a Speedcell down the fairway of the 200-yard first hole, a par 4, at the national championship.

"It moves a lot in the air. We're looking for a ball that is both long and precise." Otero's approach skirted a bunker and skidded toward the flag, leaving him an 8-yard uphill putt for birdie that he rolled in.

The technique for approach shots resembles that used by soccer players doodling after a training session, when they pick a target and chip balls toward it. A version of this was, in fact, the inspiration for inventing footgolf, said Michael Jansen, 57, the game's co-founder.

But mirroring debates around the origins of other sports, there are historical antecedents to footgolf. Codeball-on-the-green, founded in the late 1920s by William E. Code in Chicago, was a cheap alternative to golf and tennis, and it bolstered revenue for some golf clubs. It was even approved by the chief amateur sports association in the United States.

Newspaper articles from the era describe a sport nearly identical to footgolf. One story, from 1937, reported that codeball had percolated across the Midwest, even reaching Hawaii and Canada, and gained a following of 50,000 people.

Remarking on the apparent simplicity of the sport, another report warned, "Kicking a large, soft ball into one of these 18-inch bowls may sound easy, but it isn't."

Decades later, even though the cups are slightly bigger, little has changed.

"The hardest thing," said Gustavo Galarza, 28, a convenience store owner who finished 20th in the 95-man field here at Argentine championship, "is getting the ball in the hole."