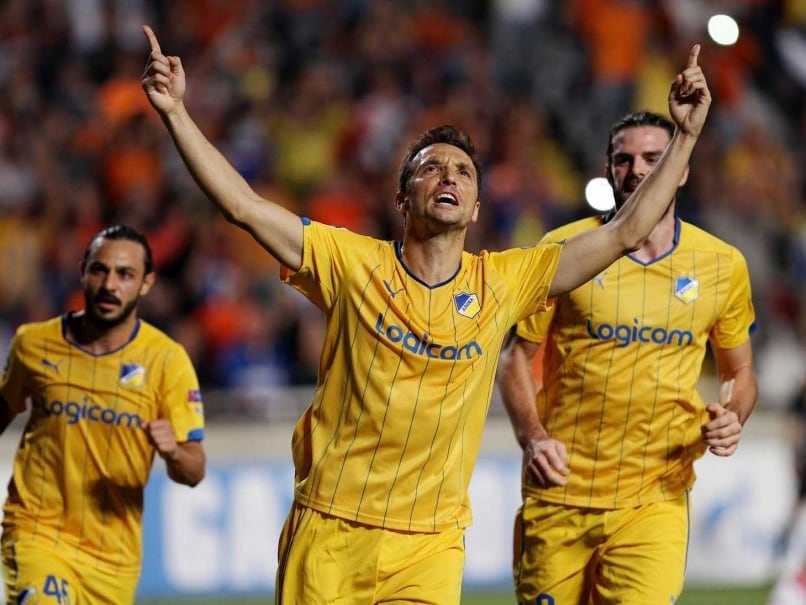 A first-half penalty earned APOEL Nicosia an entertaining 1-1 draw against Ajax in Group F of the Champions League on Tuesday.

The draw extended Ajax's winless away streak in the Champions League to eight games and gave the Cypriot team its first point in this season's competition.

Ajax lies third in the group with two points, trailing Barcelona with three and PSG with four.

"You come to 1-0 and then you get a cheap goal against you, so it was very disappointing for us," De Boer said.

"I told the players after the game that if we play like this against everybody, then everybody will have a difficult match against Ajax."

The former Panathinaikos player said APOEL employed long balls in attack to unsettle an Ajax side who he claimed has trouble with this style of play, with the Dutch team pressing high up the pitch and leaving space in its own half.

"Even though it is not our usual style of play, we wanted to use long balls against them," Donis said.

Ajax got off to a strong start and created a series of early chances. Kolbeinn Sigthorsson nearly opened the scoring just two minutes in when he shot narrowly wide after connecting with Lasse Schone's cross.

Davy Klaassen missed a chance seven minutes later when he failed to latch on to Sigthorsson's lofted pass across the APOEL goalmouth.

However, Manduca soon equalized with the spotkick after Ajax defender Ricardo van Rhijn was judged to have handled inside the box when Stathis Aloneftis tried to lift the ball over him.

The goal gave APOEL a lift and the hosts missed a clear chance to pull ahead two minutes before halftime when Cillian Sheridan came close to steering a Manduca cross into the Ajax net.

Both teams created chances in the second half in the end-to-end action. Pardo saved Schone's low shot in the 52nd, while Sheridan headed just wide moments later after meeting a cross from Stathis Aloneftis.

A diving save by Ajax goalkeeper Jasper Ceillessen denied Mario Sergio with a long-range effort in the 70th - that was followed by a speedy Ajax counterattack in which Sigthorsson shook off two APOEL defenders before volleying a shot straight at Pardo.

In the end, APOEL was fortunate to escape with the draw after Thulani Serero's shot from outside the box flew just wide of the post in injury time.

Comments
Topics mentioned in this article
Ajax Apoel Nicosia Football
Get the latest updates on IPL 2021, check out the IPL 2021 Schedule and Indian Premier League Live Score . Like us on Facebook or follow us on Twitter for more sports updates. You can also download the NDTV Cricket app for Android or iOS.