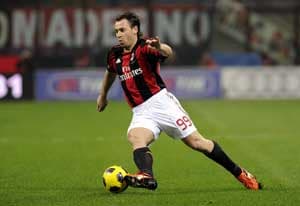 Milan says a panel of experts gathered by the Italian Sports Medicine Federation judged Cassano's condition to be "favorable."

Cassano still has to wait for the definitive go-ahead, which will come from Milan's own medical institute.

The player was hospitalized after falling ill with stroke-like symptoms on the team plane following Milan's 3-2 victory at Roma on Oct. 29, then had surgery six days later to repair a small cardiac malformation.

He resumed training on his own in January and with his teammates Thursday, although time is running out for him to make Italy's European Championship squad.

Comments
Topics mentioned in this article
Football Italy Antonio Cassano AC Milan
Get the latest updates on India vs Australia Series, check out the India vs Australia Schedule for 2020-21 and Ind vs Aus live score . Like us on Facebook or follow us on Twitter for more sports updates. You can also download the NDTV Cricket app for Android or iOS.