Inter Milan striker Antonio Cassano said he is still mystified about why he has been left on the sidelines by Italy coach Cesare Prandelli. 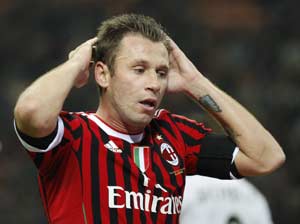 Inter Milan striker Antonio Cassano said he is still mystified about why he has been left on the sidelines by Italy coach Cesare Prandelli.

Cassano has played at every level for Italy and made 35 appearances for the senior national side but played no part in their World Cup qualifying campaign so far.

The 30-year-old, who switched from AC Milan to Inter at the start of the season, said however he has not given up on what would be his first World Cup appearance if Italy qualify.

"I don't know why I haven't been selected but I remain hopeful that I'll be considered all the way up to the World Cup," Cassano told Italian television late Monday.

He added: "I feel a bit annoyed that journalists know five days before I did that I wasn't going to be picked. I hope to go to to the World Cup but if it doesn't happen it's not a tragedy."

Cassano hit the headlines last year when he underwent heart surgery after suffering a scare on a return trip to Milan with the Rossoneri.

The Inter striker, who last played for Italy in the final of Euro 2012 -- won 4-0 by Spain -- has so far been snubbed by Prandelli for games against Bulgaria, Malta and Armenia.

Italy go into Tuesday's match against Denmark at the San Siro top of Group B with a two-point advantage on Bulgaria after three of their 10 qualifiers.

Comments
Topics mentioned in this article
Football Antonio Cassano
Get the latest updates on IPL 2021, check out the IPL 2021 Schedule and Indian Premier League Live Score . Like us on Facebook or follow us on Twitter for more sports updates. You can also download the NDTV Cricket app for Android or iOS.