Tottenham winger Andros Townsend made the most of his 20-minute appearance to score a late leveller in a 1-1 draw against Italy in Turin. 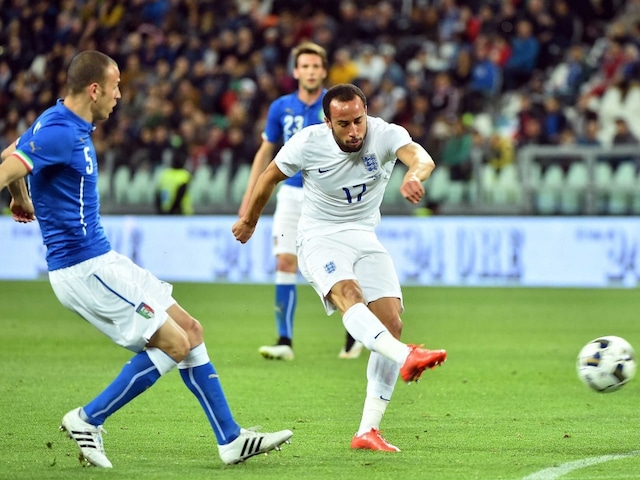 Tottenham winger Andros Townsend came off the bench to steal the limelight from club-mate Harry Kane with a late leveller in a 1-1 draw against Italy in Turin on Tuesday.

England manager Roy Hodgson was forced to hand Spurs sensation Kane his full debut alongside Wayne Rooney due to injuries to both Daniel Sturridge and Danny Welbeck.

But while the 21-year-old Kane failed to shine, Townsend made the most of his 20-minute appearance beating Gianluigi Buffon with a fine strike 11 minutes from full time to level Graziano Pelle's 29th minute opener.

At the end of an insipid opening half, Italy had most to cheer with Marco Parolo, new Italy recruit Eder and Pelle testing Joe Hart in the England goal prior to the Southampton striker's headed opener.

Parolo hit a speculative shot from 35 metres that dipped, forcing Hart to react quickly and tip over on 10 minutes.

Italy came close again when Giorgio Chiellini sent Matteo Darmian on a promising run, only for an alert Phil Jagielka to block the midfielder's drive across goal for Eder.

England's first real chance came before the half-hour when Kane rose above his marker at the back post. Although his header was blocked, the clearance fell for Rooney to fire a shot which bounced off the bar.

It was a rare glimpse from Roy Hodgson's men, but only served to move Italy up a gear.

Their efforts paid off just before the half hour when Pelle escaped his marker to meet Chiellini's inch-perfect delivery from the left with a glancing header that took Hart totally by surprise before landing inside his far post.

England appared to start with more conviction immediately after restart, when Kane found himself in possession outside the area only to bundle his shot straight at Buffon.

But the visitors were immediately on the back foot as Italy pressed high up the park.

Pelle did well to set up Italy debutant Mirko Valdifiori and although he beat his marker to set up Eder inside the area, Hart somehow saved from the Sampdoria striker with his legs.

England showed another glimpse when Rooney helped set up Kane to the right of the area, but his deflected shot hit the side netting.

Two minutes later Rooney set up Kieran Gibbs on the left but Buffon did well to spread himself out with the defender off target.

The changes gave Italy an extra spark, but England finally woke from their slumber.

Immobile was robbed of a great chance in front of goal seconds later, and at the other end Rooney spurned a great chance when he fired straight at an alert Buffon when Gibbs' long cross caught Chiellini unawares.

England's pressure finally paid off with Townsend, who replaced Fabian Delph on 70 minutes, creating space on the edge of the area to beat Buffon with a precise shot at the keeper's far post.

Italy were let off the hook moments later when Rooney ran down unchallenged on the left only to see his low drive blocked by Buffon.

Italy pressed for a late winner but Vazquez saw his shot flash just wide of Hart's far post after a move which saw the Palermo striker run on to Immobile's ball.

Comments
Topics mentioned in this article
Andros Townsend Harry Kane England Italy Football
Get the latest Cricket news, check out the India cricket schedule, Cricket live score . Like us on Facebook or follow us on Twitter for more sports updates. You can also download the NDTV Cricket app for Android or iOS.