Former Ukraine star striker Andriy Shevchenko has turned down an offer to take over as manager of the national team, Interfax news agency reported on Monday. 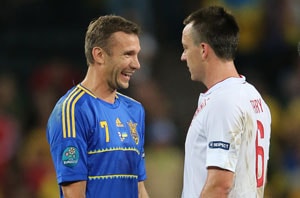 Former Ukraine star striker Andriy Shevchenko has turned down an offer to take over as manager of the national team, Interfax news agency reported on Monday.

"I consider that taking over the national squad will be a bit too hasty a move for me," Shevchenko told the Ukraine Football Federation's (FFU) media service.

"I hope that the FFU will accept my decision with understanding.

"I'm really grateful to the FFU and our football chief (Anatoly) Konkov for their top-level trust in me which they showed by offering me the post of the national manager."

"Shevchenko has experience of playing in great clubs such as Dynamo Kiev, AC Milan and Chelsea under the management of legendary coaches Valery Lobanovsky, Carlo Ancelotti and Jose Mourinho," Konkov told the press.

"He had a unique opportunity to adopt their methods, their knowledge and talents."

The FFU chief, who called Shevchenko into his under-21 and later Ukraine's national squad, said that he considered the 36-year-old's youth to be a "positive factor".

"I'm confident that Shevchenko is also capable of achieving serious heights as the national team's manager. He has enough experience and character for it. The federation meanwhile will provide him with all necessary to help him in his work."

Shevchenko announced that he was quitting football for politics last July but his Ukraine Forward! movement failed to make it into parliament after collecting just a few percent of the vote last month.

Comments
Topics mentioned in this article
Football Chelsea Rosenborg Ukraine
Get the latest updates on IPL 2021, IPL Points Table , IPL Schedule 2021 , live score . Like us on Facebook or follow us on Twitter for more sports updates. You can also download the NDTV Cricket app for Android or iOS.