Bastian Schweinsteiger will play his 121st and last international for Germany against Finland in Moenchengladbach. Ana Ivanovic said she will follow the game on television, but will not be tempted to also draw the curtain down on her career 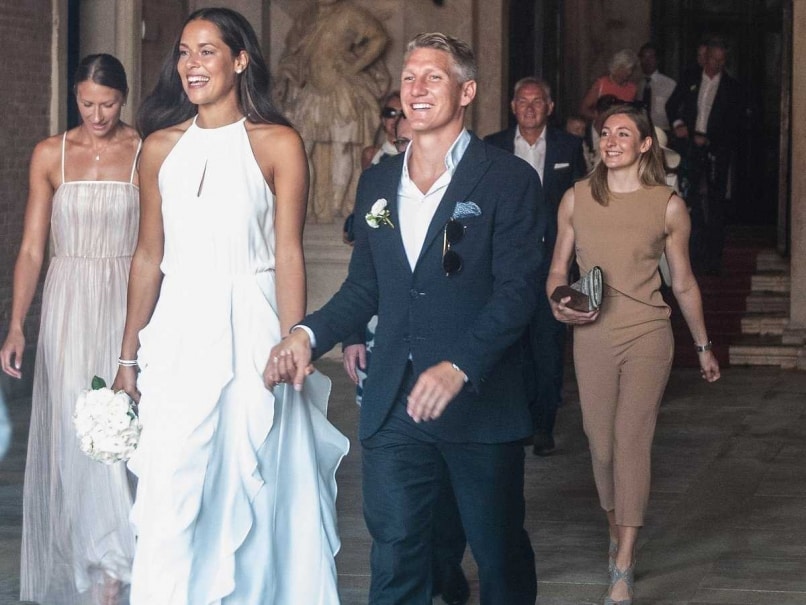 Former world number one Ana Ivanovic suffered a fourth successive defeat Tuesday but insisted she is not about to follow football star husband Bastian Schweinsteiger into international retirement.

The 2008 French Open champion did admit, however, that she would be forced to "reassess" her faltering career after giving up a 5-3 lead and squandering a set point before losing 7-6 (7/4), 6-1 to Denisa Allertova at the US Open.

The 28-year-old has not won a match since making the quarter-finals at Mallorca in June.

Since then she has lost first round at Wimbledon, the Olympics and Cincinnati with her confidence not helped by a wrist injury.

"I really feel like I have to reassess because I have been putting so many hours on court and in the gym in particular trying to get my body healthy," the Serb star said after a performance that included 41 unforced errors.

"It's been very frustrating not getting anything in return, because I really feel like I invested my heart."

Twelve months ago, she lost her opener to Dominika Cibulkova. Her best performance remains a run to the quarter-finals in 2012.

On Wednesday, the 32-year-old footballer will play his 121st and last international for Germany against Finland in Moenchengladbach.

Ivanovic, now ranked at 31 in the world and slipping towards her worst end-of-season position in 11 years, said she will follow the game on television, but will not be tempted to also draw the curtain down on her career.

"No, not at all. I just need to really see why this is happening," she explained.

"I mean I had struggles throughout my career; I had some tough times. This is not the first time I'm going through this. It just hurts because I know what I invested."

"I feel like I have the potential and game, but it hasn't really been coming together. I had four people travelling with me trying to make sure I'm on the right path and doing the right things.

"Before when I travelled with one or two people I was doing much better. These are the things I have to think about."

Allertova, meanwhile, goes on to face either Italy's Karin Knapp or Johanna Larsson of Sweden for a place in the last 32.

The 23-year-old Czech, ranked at 89 in the world, also made the second round last year where she went out to eventual runner-up Roberta Vinci.

Comments
Topics mentioned in this article
Bastian Schweinsteiger Ana Ivanovic Football
Get the latest updates on India vs Australia Series, check out the India vs Australia Schedule for 2020-21 and Ind vs Aus live score . Like us on Facebook or follow us on Twitter for more sports updates. You can also download the NDTV Cricket app for Android or iOS.